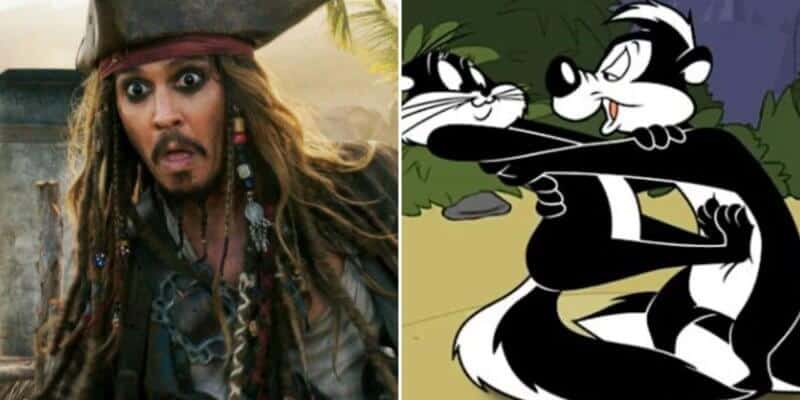 If you watched Looney Tunes on Saturday mornings growing up, you probably would still recognize a majority of the characters. One of those characters has actually been in the media with quite a negative light as of late, and he now has a connection to Pirates of the Caribbean.

If you have not been following the controversy that is currently surrounding the Pepé Le Pew character from Looney Tunes, you may remember that the skunk often made sexual advances on female characters in the show, and they typically hit him or pushed him away as the advances were always unwanted. According to Express, Le Pew “has been cut from Space Jam 2: A New Legacy. The controversial character was set to feature in a scene where he hits on a woman played by Greice Santo by kissing her arm before she slaps him and pours her drink over him. The actress, a victim of sexual harassment herself, has since said that she’s upset that the scene depicting Pepé’s behavior as unacceptable was left out of the upcoming movie.” It has since been said that Santo wanted to slap Le Pew to showcase to all generations watching that his behavior was wrong.

Interestingly enough, before the Pepé Le Pew character was essentially “canceled“, Johnny Depp used the skunk as part of his inspiration to create Jack Sparrow’s character in Pirates of the Caribbean, a choice which has unfortunately not aged well for either party involved.

It seems that the connection between Le Pew and Sparrow was made by Pirates of the Caribbean producer Jerry Bruckheimer. On the Literally! with Rob Lowe podcast, Bruckheimer detailed, “He’s a very inventive actor. He had a young daughter at the time and he was watching a lot of cartoons and fell in love with Pepé Le Pew.”

Express noted, “For example, in Pirates of the Caribbean: The Curse of the Black Pearl, Sparrow is slapped numerous times by women in Tortuga.”

Why is this news not so great for Johnny Depp?

At the moment, Johnny Depp has been in some hot water with the media due to his ongoing legal battle with ex-wife Amber Heard (Aquaman) who accused the actor of domestic abuse and violence — a legal battle that now has $150 million on the line after Depp’s counter lawsuit for defamation. Unfortunately for the Pirates actor, U.K. tabloid newspaper The Sun won their libel case when Depp sued for defamation, which set off a string of losses in terms of Depp’s career.

After that case, Depp lost his role as Gellert Grindelwald in Warner Bros. Fantastic Beasts 3 (Mads Mikkelsen is currently set to take over Depp’s character in the Fantastic Beasts franchise). We then learned that Disney had reportedly scrapped his return as Captain Jack Sparrow in Pirates of the Caribbean 6. Fan outrage quickly resulted in a petition to bring the actor back.

Most recently, we wrote about an ongoing rumor that Disney is still in talks with Depp to reappear as Sparrow. This rumor began some time ago with a report that Disney would reconsider firing Depp from the Pirates franchise if he were to win a libel lawsuit retrial.

That being said, Margot Robbie is now reportedly set to helm the Pirates of the Caribbean ship as the new captain in a new film that will continue the franchise, but begin its own storyline.  The new Pirates of the Caribbean will be female-centered, and Robbie stated that she wants her character to be apart of the LGBT community. Disney, however, has not confirmed anything about this.

Johnny Depp is also rumored to be in talks to star as Gomez Addams in The Addams Family, an idea sparked by Tim Burton, who has worked with Depp on a variety of projects. It is also rumored that the long-awaited Beetlejuice 2, which Burton has repeatedly expressed interest in directing, may come to fruition with Johnny Depp starring in the film.

Having a character inspired by a cartoon who is now deemed to have made non-consensual sexual advances while going through a delayed domestic abuse trial is not the best scenario from a PR standpoint for the actor, but that being said, Depp’s fans have been loyal to the incredibly talented actor throughout all of the challenges he has been facing.

Do you see any influence from Pepé Le Pew in Johnny Depp’s Jack Sparrow?