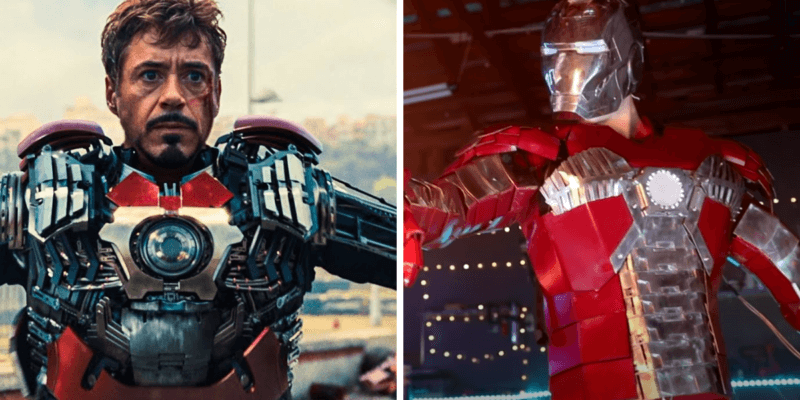 You know that incredible scene in Iron Man 2 (2010), where Tony dons the Iron Man briefcase suit?

Well, YouTuber JLaservideo clearly does. This content creator has actually reconstructed the Mark V suit from that scene and even managed to fit it into a briefcase!

If you’ve ever wanted to become Iron Man, you’ve got to check out this suit.

JLaservideo has done the (seemingly) impossible by creating Iron Man’s iconic suitcase armor. The process looks long and painful, but the result is absolutely fantastic. The YouTube user has released a lengthy video explaining exactly how each element of the Iron Man briefcase suit was put together.

The process involved a heck of a lot of metal, lasers, 3D printing, and time. However, the result is a Marvel fan’s dream come true.

However, don’t just take our word for it — check it out for yourself!

What is the Mark V suit?

Long before his nanotechnology suit in Avengers: Infinity War (2018), Tony Stark (Robert Downey Jr.) pioneered how to make his suit easier to put on. Indeed, in Iron Man 2, the hero faces the villainous Ivan Vanko / Whiplash (Mickey Rourke). In the first film, he’d have had to go back to Stark Tower to get his suit, in the second movie, Pepper Potts (Gwyneth Paltrow) throws him a briefcase containing a full Iron Man suit — the Mark V.

In the Marvel movie, the Mark V seamless covers Tony’s body after he puts his hands into the gauntlets. However, the coolest part is seeing each of the mechanisms slots into place, followed by the helmet with its lit eyes. The suit-up scene is undeniably one of the MCU’s greatest moments and is up there alongside the “falling suit up” from The Avengers.

In a film that isn’t the most beloved Marvel movie, fans sure do remember and love this scene.

A history of Iron Man’s suits

One of the best parts about the character of Tony Stark is undoubtedly his Iron Man armor. The Marvel Cinematic Universe version of the character has had several exciting suits, including the Iron Man briefcase suit.

However, the character features in many MCU films, most of which feature a unique suit. The first two suits obviously feature in Iron Man, when Tony goes up against Obadiah Stane / Iron Monger.

Iron Man 2 features both the briefcase suit and the Mark VI suit, which was created by Tony when he went up against Justin Hammer (Sam Rockwell) and Ivan Vanko at the Stark Expo. Fortunately he’s also aided by War Machine, Black Widow, and Nick Fury.

In Iron Man 3, as Tony Stark goes head to head with Aldrich Killian (Guy Pearce) he mainly wears the Mark 42. This suit is notable for being the first to come to Tony telepathically. However, the film famously features over forty suits of armor during its stunning climax, known as the Iron Legion.

After Avengers: Age of Ultron, Tony wears the Mark 46, which he uses to fight Steve Rogers in Captain America: Civil War. The Mark 47 then follows in Spider-Man: Homecoming, as Tony controls it remotely to aid Peter Parker.

However, undoubtedly Tony’s coolest suit is the Mark L, a nanotech suit that features in Infinity War. The Mark 85 is a sturdier version of this suit, which appears in Avengers: Endgame. Needless to say, this character has had his fair share of battle suits!

Why we miss Iron Man in the MCU

Robert Downey Jr’s take on Tony Stark is undeniably the most iconic performance of the MCU. Alongside staples like Nick Fury, Bruce Banner, and Steve Rogers, Tony is THE hero of the MCU.

Also, it certainly helps that Iron Man is just darn cool. From his armor to his helmet to his millionaire, genius, playboy philanthropist style; what’s there not to love about this Marvel hero?

Iconic moments that we’ll never forget include his battle with Hulk in the Hulkbuster suit in the streets of Johannesburg, his clash with Thanos on Titan, and his final sacrifice to save the entire universe. Though we’re still slightly peeved that he never got a resolution to his story with Wanda Maximoff / Scarlet Witch. Ah, well.

Check out all of JLaservideo’s work here. Catch all of Tony Stark’s adventures with The Avengers on Disney+, where you can watch (nearly) every MCU movie.

What do you think of this Iron Man suitcase armor? Let us know in the comments below.