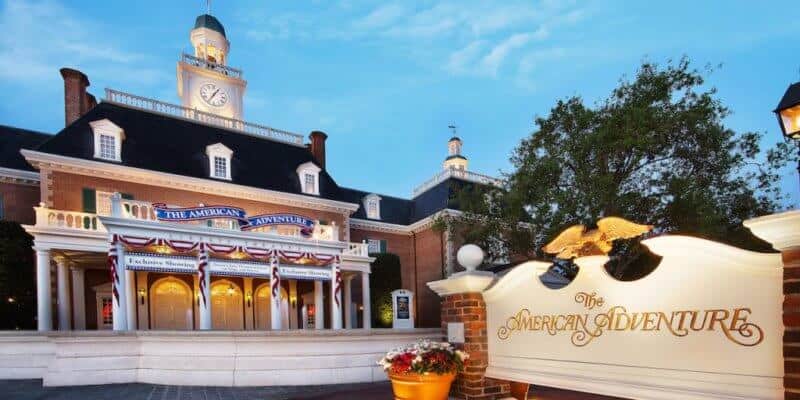 At the moment, EPCOT is undergoing a lot of changes, but the majority of those changes are not happening in the World Showcase. So, when we hear of changes coming to the pavilions, it always leaves us wanting to know more.

Most recently, it seems Disney filed a permit to have a bit of work done in the America pavilion. The Walt Disney Company hired Sign Producers Inc., a company they have used in the past for attractions such as Mickey & Minnie’s Runaway Railway at Disney’s Hollywood Studios Park.

This particular permit was filed to fabricate and install a new sign on the American Adventure attraction in the American pavilion at EPCOT.

We also don’t even know if the new sign being installed at the pavilion will have a dramatically different look than what is currently in place! The beloved attraction does not seem to have any long-term refurbishments scheduled, so if you are traveling to Orlando to visit Disney World you do not need to worry about this attraction being closed or undergoing any major changes at this time. However, if you want to see what will be closed at the Walt Disney World Resort in April, click here.

Most recently, fans of Soul had the chance to explore the film deeper with Joe Gardner as the Soul exhibit that was installed in honor of Black History Month.

Related: Voices of Liberty Return to EPCOT for 2021 Festival of the Arts

Disney describes the American Adventure as:

How They Did It
A feat of entertainment, engineering and aesthetics, The American Adventure took Disney Imagineers 5 years to complete.

The stunning building in which it is housed was intended as a “people’s mansion,” taking design cues from the classic Georgian style of the late 1700s, Colonial Williamsburg, Independence Hall, Thomas Jefferson’s Monticello and the Old State House in Boston.

Pivotal moments in history appear and disappear seamlessly through the use of a massive computer-controlled movable device. Ten different sets are stored under the stage and are moved forward or backward on cue by this American technological marvel.

What else is EPCOT working on?

Do you think the American Adventure needs any refurbishment done?

If you want to check out EPCOT’s construction in person and explore the International Flower and Garden Festival with an Orange bird sipper — or perhaps come visit for Walt Disney World’s 50th Anniversary Celebration at Magic Kingdom, click here to begin planning that magical vacation!

Comments Off on This EPCOT Pavilion Will Get a Slight Upgrade!