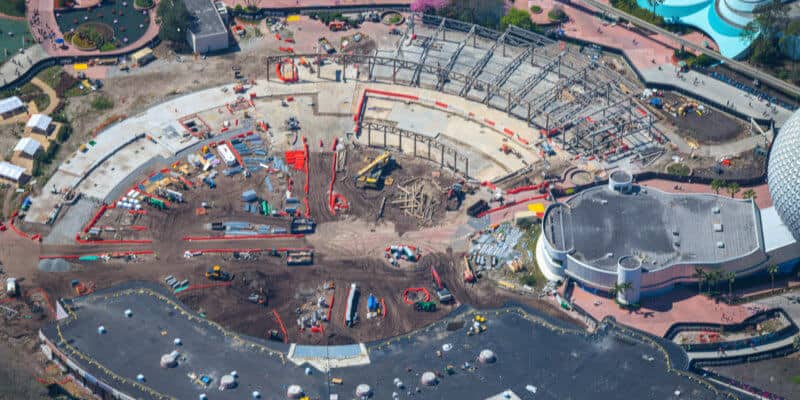 It seems that every few years there is a Walt Disney World theme park that is under heavy construction.
Previously, Disney’s Hollywood Studios was deemed a “half-day park” by many due to the fact that a lot of the park was still undergoing construction. Now with Star Wars: Galaxy’s Edge and Toy Story Land, it can be nearly impossible for some Guests to score a Disney Park Pass for the theme park. Recently, EPCOT is undergoing a similar transition.

In 2019 at the D23 Expo, Disney announced the complete overhaul of EPCOT, primarily in Future World. Now, when you arrive in EPCOT, there are construction walls at every turn, until you are able to enter World Showcase. As a Guest, it may seem like construction walls have been up forever, and that no progress has been made because we can’t see it. Well, now, thanks to pilot and photographer Jonathan Salazar (@TheDisneyPilot on Instagram), we can get a birds-eye view of the current EPCOT construction.

If you are planning to visit the theme park, Guests should know that Future World is undergoing a huge renovation right now, which as a result, will divide the section of the park into three new neighborhoods — World Celebration, World Discovery, and World Nature (with World Showcase of course located in the back of the park).

Below, you can see how Innoventions East and West are completely demolished, with concrete being poured in place of what once was home to Club Cool and the infamous Beverly drink (as well as other eateries).

The Play! pavilion had been planned for this area, though Disney hasn’t provided any updates on that and the announcement was removed from a press release.

What we can take away from this aerial shot of the construction that is currently ongoing at EPCOT is a reminder of the amount of space the park is currently missing. At the moment, Guests can bypass the area and head straight to the back of Future World where Mission: Space and Test Track are located. Seeing this view is a reminder that there is a lot more that EPCOT will have to offer in the front of their park, once the transformation is complete.

That being said, the Disney World 50th anniversary celebration is going to last for 18 months, so it is likely that Disney could complete construction at some point in that timeline. However, Disney has yet to comment on an exact timeline for when the transformation of Future World will be complete.

In the future, Guests can also expect to see Space 220, Remy’s Ratatouille Adventure, Journey of Water, a newly lit Spaceship Earth, and Guardians of the Galaxy: Cosmic Rewind to also debut.

When do you think EPCOT will fully wrap all of its construction? Are you planning to visit soon or waiting until the work is complete?

If you want to check out EPCOT’s construction in person and explore the International Flower and Garden Festival with an Orange bird sipper — or perhaps come visit for Walt Disney World’s 50th Anniversary Celebration at Magic Kingdom, click here to begin planning that magical vacation!