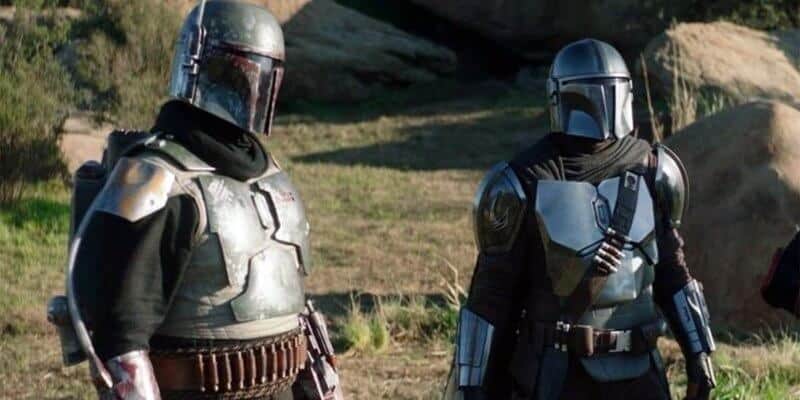 Temuera Morrison first joined the Star Wars franchise as Jango Fett in Star Wars: Episode II – Attack of the Clones (2002).  Jango served as the template for the Clone Army of the Republic. He was allowed to keep one clone to raise as his son. That character? Boba Fett.

Boba Fett first appeared as an animated character in the non-canon 1978 Star Wars Holiday Special. The bounty hunter then became a fan-favorite with a cult following thanks to his appearances in both Star Wars: Episode V – The Empire Strikes Back (1980) and Star Wars: Episode VI – Return of the Jedi (1983).

Then, last year, in the second season of The Mandalorian, Fett made his triumphant return to Star Wars and New Zealand-born Morrison got the chance to play him.

Fett, with sharpshooter Fennec Shand (Ming-Na Wen) by his side, epically returned in The Mandalorian Season 2, Episode 6 (“Chapter 14: The Tragedy”). He ultimately vowed to work with title character Din Djarin (Pedro Pascal) until Grogu (AKA Baby Yoda) could be saved from Moff Gideon (Giancarlo Esposito) and his Imperial remnant.

Fett made good on his promise, only leaving Djarin and his crew after Grogu was safely spirited away by Jedi Knight Luke Skywalker (Mark Hamill) in the Season 2 finale episode, “Chapter 16: The Rescue.”

In a post-credits scene, Star Wars fans got the surprise of a lifetime when an unexpected Mandalorian spinoff, The Book of Boba Fett, was announced. The series, which will take place on the iconic Star Wars planet Tatooine, will debut in December 2021.

Now, Mandalorian actor, Morrison, has spoken to a New Zealand entertainment show about Book of Boba Fett filming, which is currently underway in Los Angeles.

Morrision said the team is:

“Working with shields, masks, rapid tests every 3 days, uh, normal tests once a week. It’s a different way of working now, but we’re still getting through some stuff.”

“Things are still being made. You just have to go to work a little bit earlier. They take your temperature. They give you a band [a wristband] so you can stay on set. Then, um, I’m one of the blessed ones. They come to my trailer to get my, um, COVID test. So, we’re still filming.”

Morrison showed off his sense of humor when he said:

“When I walk on set, people are told to put their mask down [pull face shields over their faces]. I kind of feel like Mr. Big Shot. They go, ‘Actor on set!’ and everyone’s got to put their shield down, so it’s a bit of a procedure.”

The Star Wars actor confirmed that he is currently working on The Book of Boba Fett, but did not provide details about the series. This is unsurprising, as Mandalorian creator Jon Favreau and executive producer Dave Filoni do not like to share information about their shows before they debut.

During the interview, Morrison also quipped, “It’s no good being cold in Hollywood. You have to be hot. I’m basically simmering.”

This is, in large part, thanks to the Star Wars franchise. Although he is only confirmed for The Book of Boba Fett, there are rumors that Morrison is also set to appear in live-action as another clone, Commander Cody. Cody last appeared in Filoni’s animated series, Star Wars: The Clone Wars.

Perhaps the funniest tidbit of information Morrision shared is that he and Robert Rodriguez, who directed “The Tragedy,” have started a real-life band called Boba Fret and the Strumtroopers. Currently, they are only performing cover songs, but may release an original tune at some point in the future!

What do we know about The Book of Boba Fett?

As previously stated, few details have been confirmed about the upcoming Star Wars series, The Book of Boba Fett. Jon Favreau debuted the logo for the show on Good Morning America earlier this year and it clearly takes inspiration from Boba Fett’s armor.

Beyond that, we know that both Morrison and Wen are involved from the aforementioned post-credits scene in Jabba the Hutt’s former palace .

Many fans have speculated that we could see a Han Solo (Harrison Ford) cameo at the Mos Eisley cantina — perhaps using the same CGI technology that was used to de-age Mark Hamill.

Others are guessing that we could see the return of Mos Pelgo Marshal Cobb Vanth (Timothy Olyphant), who appeared in only one episode of The Mandalorian Season 2 (“Chapter 9: The Marshal”).

There is no word on whether or not we’ll see another Sarlacc pit or Krayt dragon. We’ll just have to be patient and see — in the meantime, we’ll still be wondering if beskar really is stronger than Sarlacc teeth.

Are you looking forward to seeing more of Temuera Morrison in the Star Wars universe? Stay tuned to Inside the Magic for all of the details about The Mandalorian Season 3 and its spinoffs — The Book of Boba Fett, Ahsoka, and Rangers of the New Republic.

Comments Off on “Simmering” ‘Mandalorian’ Star Confirms Spinoff Is Underway