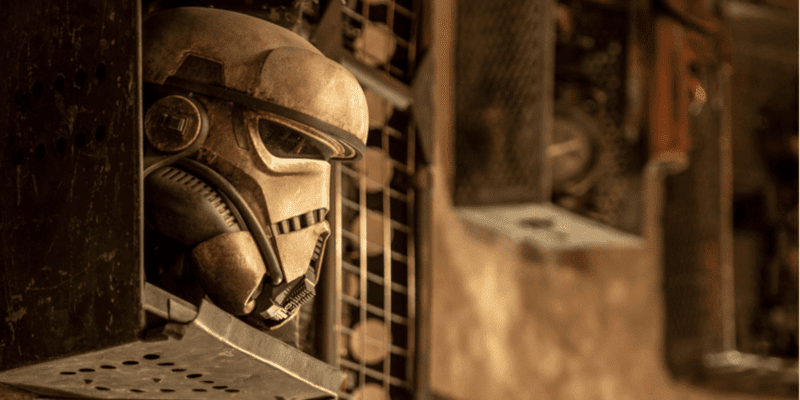 At the 2015 D23 Expo, when The Walt Disney Company announced that Star Wars: Galaxy’s Edge was coming to both Walt Disney World Resort in Orlando, Florida and Disneyland Resort in Anaheim, California, fans were ecstatic.

The news even converted some Star Wars fans who had been wary of Disney’s 2012 purchase of Lucasfilm. The notion of being able to actually set foot on a planet in a galaxy far, far away was enough to convert even the most skeptical.

Now, since the 14-acre Disney Parks expansion opened in 2019, the world of Batuu has only continued to grow.

First, there was the Target Star Wars: Galaxy’s Edge Trading Post collaboration, much-touted by Disney Imagineer Scott Trowbridge. Trowbridge had a hand in nearly every aspect of the creation of Galaxy’s Edge, from the 100-foot-long full-scale replica of Han Solo’s Millennium Falcon to the smallest details, like the hand-painted rock formations on the walls surrounding Docking Bay 7 Food & Cargo.

As of February 19, 2021, however, a full Star Wars Trading Post is available to the public at the Downtown Disney District! Fans are already raving about the immersive shopping experience. Legacy Passholder Guests were able to experience the new location February 16-18, 2021 during the Legacy Passholder Preview Event.

The Star Wars store officially opened to the public on February 19, 2021 with all sorts of unique Star Wars and Galaxy’s Edge merchandise, including a whole wall of plush creatures from a galaxy far, far away!

Related: Journey to Ahch-To With This ‘Chewie and the Porgs’ Read-a-Long & Craft

Now, thanks to a new trademark, it seems that the Trading Post might be expanding worldwide! This would be great news for the global Star Wars fan community.

If this new trademark application portends what it seems to, Australian Star Wars fans could soon be able to purchase Star Wars Trading Post merchandise locally. This would be the first time anything from Star Wars: Galaxy’s Edge was available for purchase outside the United States.

The trademark application was accepted on December 16, 2020, so if a global Star Wars merchandise collection is on the way, we are likely to see details sometime soon.

What could an expanded availability of Star Wars merchandise mean?

If The Walt Disney Company is, in fact, transporting Star Wars merchandise to other countries, it could potentially indicate that they have plans to expand Galaxy’s Edge in more ways than one.

At this time, for example, none of Disney’s theme parks in Asia — Tokyo Disney Resort, Hong Kong Disneyland, and Shanghai Disneyland — have Star Wars-themed lands.

It’s even possible that Disney could use the hidden jungle Resistance base model from Disneyland’s new Star Wars Trading Post location as a model for future Star Wars themed stores around the globe.

Rey’s iconic speeder from the sequel trilogy is parked outside of the Downtown Disney location, so additional retail outlets could even give Disney the opportunity to feature more Star Wars memorabilia. Imagine a different mode of transit at every store — Din Djarin’s Mandalorian speeder and Luke Skywalker’s X-wing, for example!

While this trademark application is certainly no guarantee that Disney will continue expanding the Star Wars universe to its theme parks around the world, it absolutely indicates an intention to make the Star Wars franchise even bigger than it has ever been before.

What do you think? Would you like to be able to purchase plush toys, action figures, and other items straight from Black Spire Outpost outside the United States?