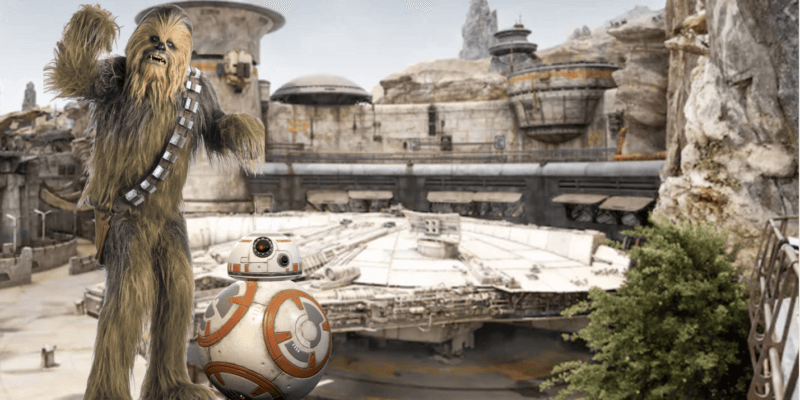 One year ago today, Walt Disney World Resort Guests were able to set foot on Batuu for the very first time.

Star Wars: Galaxy’s Edge opened at Disney’s Hollywood Studios on August 29, 2019, marking the largest single-land expansion to ever open at the theme park. The 14-acre addition transports Disney World Guests to a galaxy far, far away to a planet on the Outer Rim.

Two days ago, Scott Trowbridge, the creative mind behind the Galaxy’s Edge lands at both Walt Disney World and Disneyland Resort, spoke to the D23 Inside Disney podcast to share information about what fans have to look forward to over the course of the Star Wars park’s second year.

One topic Trowbridge specifically focused on was the upcoming Star Wars: Galactic Starcruiser hotel. As of right now, this immersive experience will only be available at Disney World and will take Guests on an epic two-night adventure on a glamorous starcruiser called The Halcyon.

Galaxy’s Edge’s first year at Disney World certainly didn’t go completely according to plan with the unexpected COVID-19 closure. However, the park is now back open and is even offering some fun new experiences for Guests!

If you can’t be at Hollywood Studios in Orlando today to celebrate Galaxy’s Edge’s first birthday in-person, you can take to social media to share your love for Disney’s Star Wars land!

Yesterday, Imagineer Zach Riddley got the party started with this tribute to Batuu.

Tomorrow is the first anniversary of #StarWarsGalaxysEdge @waltdisneyworld. It’s hard to believe it has been one year since grand opening – and to celebrate here are a fewer my favorite design details. Bright Suns for all travelers to #batuu @waltdisneyimagineering #starwars @starwars @disneyparksblog #design #jedi #disney #disneyparksblog #maytheforcebewithyou #cantina

Tomorrow is the first anniversary of #StarWarsGalaxysEdge @waltdisneyworld. It’s hard to believe it has been one year since grand opening – and to celebrate here are a fewer my favorite design details. Bright Suns for all travelers to #batuu

What are you doing to celebrate the first anniversary of Galaxy’s Edge at Disney World today? Are you in the parks or at home?