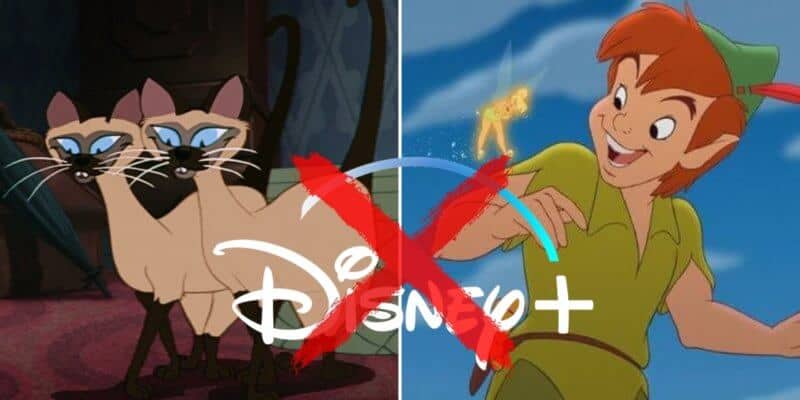 In November 2019, Disney brought fans the incredible streaming service we all were waiting for — Disney+.

Filled with unique content, classic animated films, Disney Channel television shows, and Marvel Star Wars, and National Geographic content, fans around the world were so excited to finally be able to access this library of content.

The service first launched in the United States in November 2019 but the company almost immediately took extra precautions by placing a warning in the description of films regarding any controversial or outdated scenes before watching some of Disney’s older content.

For reference, some of the scenes that were in question were those from older Walt Disney Animated Classics, such as Disney’s Dumbo and Lady and the Tramp.

Warnings Showed at Start of Films

Not long after these initial warnings were displayed within the description of certain films, Disney+ decided to take it another step further and updated its warnings to reflect the acknowledgment of negative depictions and/or mistreatment of people or cultures.

The new warning — which, instead of being placed within the film’s descriptions, is actually shown before the start of certain films — reads:

And just last month, we reported that certain films went missing from children’s profiles on Disney+. The DailyMail stated the following regarding Disney+ in the United Kingdom:

Bosses at Disney have blocked anyone under the age of seven from watching the 1953 animated classic on its streaming service over concerns that it portrays racial stereotypes, The Mail on Sunday can reveal.

Three other long-standing family favourites – The Aristocats, Swiss Family Robinson and Dumbo – have also been removed from children’s accounts for breaching ‘content advisories’ that were recently put in place.

Inside the Magic also confirmed this to be true for the United States. When we checked the children’s account, we could not find The Aristocats on the platform, for example. However, these films are still available on the regular profiles, with the same content warning as before.

Some of these films that have been removed for “breaching content advisories” include Peter Pan, Dumbo, Lady and the Tramp, and others.

In Disney’s Dumbo, for example, during the scene where the black crows sing “When I See an Elephant Fly,” fans and audiences have agreed that it could be depicted and viewed as a negative representation of African Americans. The same goes for a scene from Disney’s Lady and the Tramp. The Siamese Cats sing “The Siamese Cat Song,” which many agree is very catchy, but as you listen closely to the lyrics, it makes sense as to why there has been controversy.

Why You Shouldn’t Be Worried

At first, many parents were not happy about this sudden change, as according to DailyMail, one parent said, “I wanted to watch Peter Pan with my daughter, but I couldn’t find it anywhere. Then I realized they had all gone – they had been removed from the kids’ accounts. It was shocking.”

But, after the initial shock has set, we can look at this change in a realistic, positive way. First, as USA Today points out, Disney+, did not remove these films from its service entirely, only from those profiles intended for a young audience. Families who still wish to watch these films can do so, just from an older user’s account.

Controversy has emerged surrounding certain content ever since the movie industry first took off in the 1920s, not just in today’s day in age.

Risqué movies in the 1920s led to the so-called Hays Code, which influenced movie content from 1934 to 1968. At that point, the Motion Picture Association of America’s new rating system commenced, launching the now-familiar G, PG, R ratings.

In 1984, gory scenes in “Indiana Jones and the Temple of Doom” and “Gremlins” birthed the PG-13 rating. Since then, however, multiple studies have shown that today’s PG-13 movies are often more violent than R-rated movies were in the 1980s. That’s led some to question whether adding a new age category to protect young viewers actually had exactly the opposite effect.

So what exactly is the point of all of this? USA Today says “entertainment ratings are not an exact science.”

But the inexorable passage of time means those subjective assessments also change over time. What once would have seemed acceptable may seem utterly offensive decades later.

All in all, the point is that culture changes just as times change. We can watch a film from another era, but, in my opinion, we must do so with an understanding that it has aged. The times in which we are watching the movie won’t be the same as they were when the movie was made.

The bottom line? People may respond to certain films differently today than the original audience members had — and that is okay.

What do you think of Disney+ removing films from children’s profiles? Let us know in the comments below.