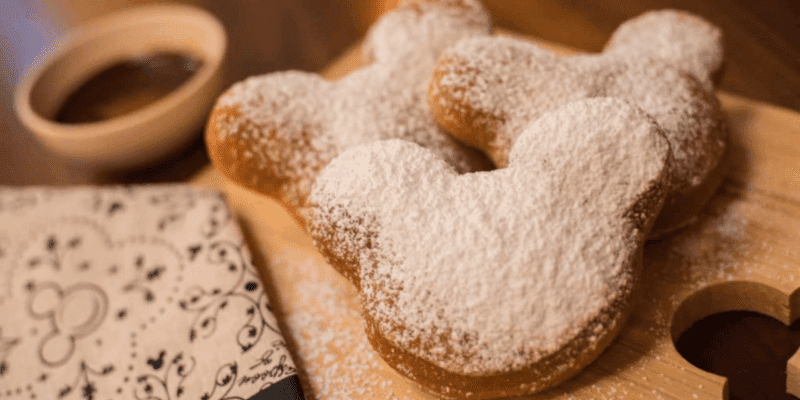 Disney Parks treats and food are as much of an attraction as some of the rides. Each of the Disney Parks around the world brings something special to the table, quite literally, with their influences of the local area’s culture mixed with Disney. Many Guests will even head to the parks just for Disney Parks snacks. Even if they don’t have the opportunity to make it into the parks, they’ll often take a day trip to Downtown Disney at Disneyland or Disney Springs at Disney World to enjoy some of those Disney Parks treats.

Our favorite Disney Parks snacks come in all shapes and sizes, but they seem to always taste better when they’re Mickey-shaped. Mickey-shaped snacks are fun for both kids and adults alike. For some of these snacks, we’ll look forward to the seasonal flavors and decorations that makes them unique for each holiday. Let’s look at some of the Disney Parks Snacks that are already offered in Mickey silhouettes.

This is probably one of the most famous Mickey-shaped Disney Parks snacks out there. This yummy, messy snack started out at New Orleans Square in Disneyland, so Guests still often pick up Mickey-shaped Beignets at the window of the Mint Julep Bar at the French Market, order them at Cafe Orleans, and — if they’re lucky enough to experience it — visit Club 33 for its famous pumpkin beignest. It’s not only a Disneyland snack, though, because Guests at Walt Disney World enjoy it just as much all covered in powdered sugar.

That’s how some Disney Parks Guests like to enjoy these Mickey-shaped Pretzels, plain and salted. Others prefer them with a side of caramel or cheese — or even filled with cream cheese or jalapeno cheese! Whatever way you enjoy them, they’ll always continue to be classic, nostalgic, and one of the top go-to snack items at the Disney Parks.

This is not only a delicious snack, but great for breakfast, lunch, and brunch. Those on a Disney vacation will often have a Disney Dining Plan (currently suspended amid the pandemic) that will include a breakfast just to have a Mickey waffle for breakfast at the parks, but it’s just as popular at home. There are now Mickey waffle makers in the homes of many Disney fans, so those Disney Sunday brunches are taking social media by storm! Mickey waffles are already magical topped with fruit and whipped cream, but add a side of breakfast sausage or bacon, and you have a perfect meal.

People may think that the Mickey ice cream bars and ice cream sandwiches are only popular during the summer months, but let’s be honest here. Ice cream is popular any time of year! They’re great on the go, so you can treat yourself while you hop over to the next attraction or entertainment option without missing a beat.

These are also all-year-long Disney sweet treats that have seasonal excitement. The Mickey caramel apple and Rice Krispie  treats often showcase whatever holiday is happening that season. The best part is watching the Disney Park candy makers through the windows curate them to perfection!

Disney Parks Snacks That Should be Mickey-Shaped

As mentioned before, our favorite Disney Parks snacks come in all shapes and sizes, but we can still wish for more of them to come, whether they be new, or reimagined ones that are already popular. Here are some of the existing Disney Parks snacks that we think should be transformed into a Mickey shape!

Churros are one of the first things you will smell when you walk onto Main Street U.S.A. at Disneyland Resort. Arguably more popular in California than at Walt Disney World Resort’s Magic Kingdom, last year Disney released a recipe so fans of the classic Disneyland churro can make it at home. Instead of coming in a wand, imagine this twisted up like a pretzel. How cute! Churro toffee most certainly would be fun to cut out with a large Mickey cookie cutter.

The funnel cake is probably one of the most traditional carnival foods in the United States. It would be quite the task for Disney to fry them up in the Mickey shape, but maybe it could be served-up with a large funnel cake and two mini ones to make Mickey’s ears, or even just decorated like the one below!

Gaston’s Famous Cinnamon Rolls are a yummy Magic Kingdom snack, but what if cinnamon rolls came in a Mickey shape at all the Disney Parks? They’re so delicious paired with a cup of hot cocoa or coffee with the ooey-gooey frosting sticking to your fingers. It’s literally finger-licking good!

Has anyone figured out how to eat cotton candy without getting it all over their face? Please share if you have! In Japan, there are specific cotton candy stores that serve up cotton candy in different designs. Disney is known for its imagination so we’re sure a Mickey-shaped cotton candy is totally doable, especially, perhaps, at Tokyo Disney Resort!

Alright, so we’re probably not going to see Mickey-shaped Dole Whip or popcorn options, but maybe one day the way each of these are served can be changed with the cups looking like our favorite mouse. Disney Parks popcorn buckets have become quite the collectible item over the years, but if you’re just making the traditional popcorn purchase at the parks, it could come in a red popcorn bucket that could probably be reinvented into a Mickey-shaped one.

There are so many more Disney Parks snacks that we haven’t covered here. New ones are being created all the time at the Disney Parks with all the festivals and seasonal flavors. Do you have a favorite snack from the Disney Parks? There are probably many Disney fans out there with wild imaginations who could dream-up all sorts of Mickey-shaped foods!

Share with us in the comments below what Disney Parks Snack you’d like to see come in a Mickey shape next.

Comments Off on What Disney Parks Snacks Should Become Mickey-Shaped Next?