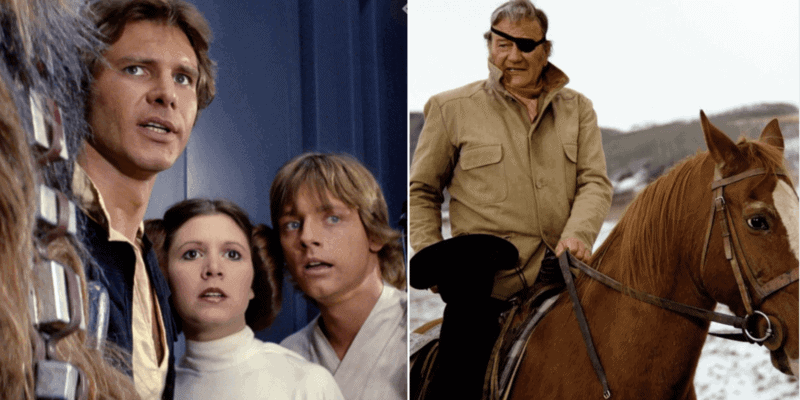 It’s no secret that Star Wars creator George Lucas took inspiration from classic Westerns when he created a galaxy far, far away. The entire original trilogy — Star Wars: A New Hope (1977), Star Wars: The Empire Strikes Back (1980), and Star Wars: Return of the Jedi (1983) — all paid homage to the iconic movie genre.

Then, in 2019, Jon Favreau and Dave Filoni’s The Mandalorian followed suit, drawing heavily from Spaghetti Westerns like The Good, The Bad, and The Ugly (1966).

Even if you’re a major Star Wars fan, though, there’s one Western movie and Star Wars connection you probably didn’t know — until now, at least. Legendary cowboy actor, John Wayne (AKA The Duke), was actually featured in a Star Wars movie.

“I always wanted to do an insect man – we didn’t really have an insect man come along until Poggle the Lesser [from Episodes II and III]. We had that character that looked kind of like a mosquito from the first Star Wars [Garindan] that we found we needed a sound for. And I was wondering back a few months ago how I did it – because I keep notes and tapes – and I discovered it was an electronic buzzing which had come off of my synthesizer that was triggered by a human voice. And I listened to it and realized it was John Wayne – I had found some loop lines in the trash from the studio that had been thrown away. So the buzzing was triggered by some dialog like ‘All right, what are you doin’ in this town’ or something like that.”

Born Marion Robert Morrison, John Wayne’s incredible acting career spanned from 1926 to 1977. He was born in Iowa in 1907 and died in Southern California in Los Angeles in 1979.

Before Wayne became an icon, he played for the University of Southern California (USC) on a football scholarship.

He then went on to star in some of the most iconic American Western movies of all time, including Rooster Cogburn (1975) with Katharine Hepburn,  True Grit (1969), The Man Who Shot Liberty Valance (1962), The Alamo (1960) — Wayne’s character was Colonel Davy Crockett — and director John Ford’s Stagecoach (1939).

He provided the voice of Imperial spy Garindan in Star Wars: Episode IV A New Hope via stock audio, making this his last role in a film before his death. Wayne’s voice was processed greatly for the movie.

His voice for Garindan would be recycled in LEGO Star Wars II: The Original Trilogy and its compilation re-release, LEGO Star Wars: The Complete Saga.

Famously, Wayne’s last words were, “Of course I know who you are. You’re my girl. I love you.”

He also plays a crucial role in A New Hope, giving up our heroes’ location to stormtroopers.

Also called “Long-Snoot,” Garindan was considered “the greatest spy in the Mos Eisley spaceport” on the planet Tatooine.

He was a Kubaz — a species similar to anteaters that ate insects with their snouts — who was not at all liked by certain crime lords, including Jabba the Hutt.

Wookieepedia, again, has provided detailed information regarding Garindan’s past:

Many believed that he was wildly wealthy, though his vast amounts of credits were only seen when he paid for information. He was seen carrying the Model 434 blaster pistol, popular among bounty hunters and mercenaries.

Garindan’s information was priceless, and his skills went to the highest bidder, whether it be to Jabba the Hutt (who was wary of Garindan finding out too much about Jabba’s business transactions) or to the Imperials. Garindan was apparently capable of finding out a wide variety of information, as evidenced when he gave the possible whereabouts to Jabba concerning the fabled Yavin Vassilika.

Most recently, the Kubaz species was seen in Season 1, Episode 1 (“Chapter 1: The Mandalorian”) of The Mandalorian. An unidentified ferryman appeared on the ice planet Maldo as Din Djarin (Pedro Pascal) was collecting a bounty.

Did you know John Wayne was involved in a Star Wars movie? Do you hope to see more Kubaz characters as the Star Wars universe continues to expand on Disney+ and beyond? To learn more about John Wayne’s legacy on a daily basis, follow the Official John Wayne Twitter Account.