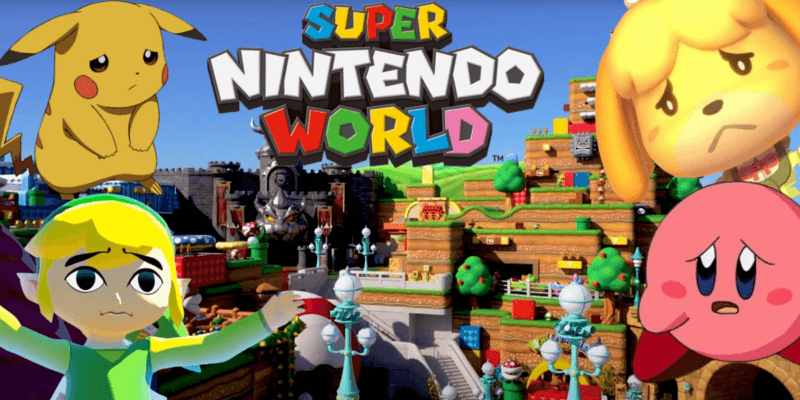 The park looks mind-blowing, with a Mario Kart ride as the clear highlight.

However, many Nintendo fans have started to ask, Why only Mario theming? Nintendo has some of the most diverse and iconic intellectual properties out there, so why is every attraction themed around the plumber and friends?

Related: Annual Passholders Will Have the Chance to Preview Super Nintendo World

Obviously, Mario should be the focus

No one is disputing that Mario is Nintendo’s biggest franchise. However, it seems strange to theme the park entirely around the Mushroom Kingdom, when it is called Super Nintendo World. Isn’t “Super Mario World” more appropriate?

There are three main attractions at the time of this article’s publication: the aforementioned Mario Kart attraction, Yoshi’s Adventure attraction, plus an attraction based on Bowser Jr. that incorporates the (super cool) power up bands.

A Donkey Kong Country expansion is also thought to be planned as part of “phase two” of the park’s development. However, DK’s games are mostly considered part of the Mario franchise. The two did originate together on the Famicom/NES, after all!

A leaked model from The Unofficial Universal Podcast shows a Donkey Kong area in the plans for Universal Orlando’s version of the park. It suggests that a DK roller coaster will be the expansion’s main attraction.

However, we must also remember that last week’s Nintendo Direct didn’t reveal the entire land. It may be that there will be some elements from other video game franchises dotted around, even before the expansion.

Which franchises are missing?

So far, we’ve heard nothing about Pokémon, Star Fox, F-Zero, Pikmin, Kirby, Super Smash Bros, Animal Crossing, and, most egregious of all, The Legend of Zelda. However, the trees and presents seen in the direct feel as though they could be from Animal Crossing, but it’s hard to say without seeing them up close.

It’s a shame, as the merchandise store seems to be based on the Mario 1 UPs, while Animal Crossing has the perfect option: Tom Nook’s store, Nook’s Cranny! Equally, the lack of Zelda representation seems crazy, especially with how well fans received Breath of the Wild (the 2017 Zelda title on the Nintendo Switch).

The Lack of Pokémon is slightly more understandable, however. The license for the world’s most profitable multi-media franchise is owned by Game Freak and The Pokémon Company and not just Nintendo. Therefore, it could feasibly be more tricky to implement Pikachu and friends into the park.

Hope for more Nintendo themed attractions is not lost

Let’s all remember that Super Nintendo World isn’t even open yet. We know that Universal will be heavily expanding it in the future, as it has with its Harry Potter–inspired areas at The Wizarding World of Harry Potter.

Additionally, elements from The Legend of Zelda have been rumored to be featured at at Islands of Adventure, while Pokémon has been rumored to feature in the KidsZone at Universal Orlando.

At any rate, the park looks absolutely fantastic. It really does look like something from a Mario game, and for a Nintendo and theme park fanatic, it’s a dream come true.

Let’s hope future developments show some love for the other Nintendo franchises, particularly when other resorts finally get their own Super Nintendo World.

Related: There Is A New Way To Park Hop at Universal Orlando