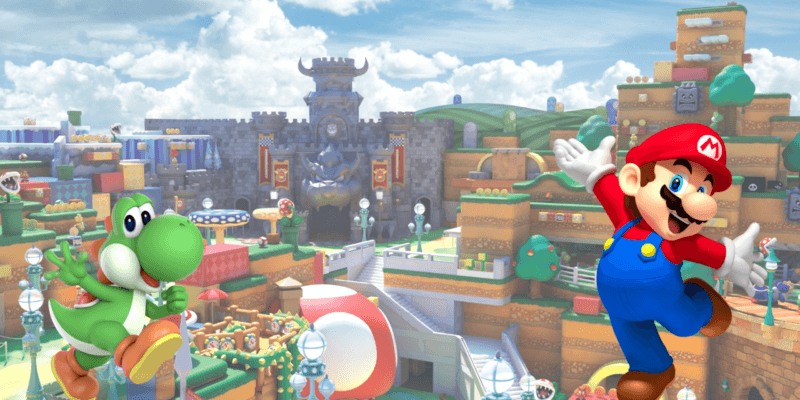 We don’t know a single Nintendo fan who isn’t excited by the new land that Universal Studios Japan has in the works. While we now know that the land is set to open in Spring next year, we’ve learnt today that Universal is giving Annual Passholders a chance to be among the first people to experience the new land.

The newsletter sent out to Annual Passholders in Japan hasn’t detailed how many people will be allowed early access to Super Nintendo World but it is fantastic to see the resort offering those with an annual pass a first look at the new land and the attractions on offer.

A reminder that there look to be two major attractions launching with Super Nintendo World. The first seems to be an omni-mover style ride that is themed to Yoshi that will travel both indoors and outdoors and while we don’t know an awful lot about this attraction, it’s highly likely the Yoshi ride is going to be one that can be enjoyed by adults and kids alike.

The next attraction is based on one of the most popular video games of all time, Super Mario Kart. We know (thanks to leaks) that this is going to be one of the most ambitious attractions that Universal has ever worked on, combining screens, augmented reality (rumored), and a life-sized Kart that has the ability to spin. The Mario Kart ride looks to be the one that is placed within Bowser’s Castle.

While the main attractions at Super Nintendo World will be opening next Spring, Universal Studios Japan has already opened a Mario Cafe and store in the Hollywood area of the park. The new openings feature food, beverages and merchandise themed to some of the most popular Nintendo characters including Mario, Luigi, Princess Peach, Toad, Bowser, Donkey Kong, Yoshi, and more!

We also know that Super Nintendo World has broken ground at Universal Studios Hollywood though sadly there has been no update on what is happening in Orlando following the news that the new Epic Universe park was seeing a delay in construction.

Either way, this is Universal’s biggest project since Harry Potter and we can’t wait to see it open!

Are you looking forward to the opening of Super Nintendo World? Let us know in the comments below!