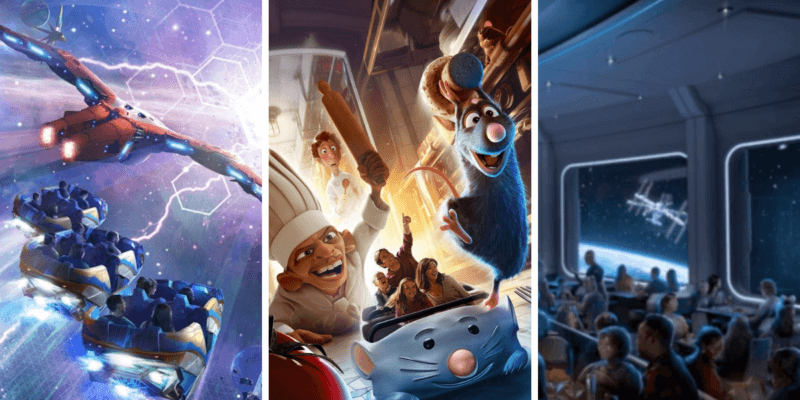 EPCOT — the second oldest theme park at Walt Disney World Resort in Orlando, Florida — is currently undergoing a huge transformation. Though some projects were delayed indefinitely, there are a number of attractions and restaurants in the world for this WDW park. But when will they open, and why isn’t Disney revealing much information?

At this time, we know that the following attractions, experiences, and restaurants are currently in work works at EPCOT:

Aside from wondering when these new offerings will debut, many are also wondering why Disney has stayed mum when it comes to opening dates.

One reason Disney may not yet want to share when these new offerings will open could be the fact that so much remains uncertain regarding the current pandemic.

The world is experiencing an ongoing pandemic, and Walt Disney World is not immune to the long-term effects of it. For months — because of the temporary closures of the Disney Parks — construction was delayed for projects like Remy’s Ratatouille Adventure, Space 220 Restaurant, and Guardians of the Galaxy: Cosmic Rewind.

When construction crews could finally get back to work, it became clear to many hopeful Guests that it would be a while longer before we could experience these new attractions and dining options. And with so much uncertainty regarding how long current pandemic-related theme park restrictions may last, Disney may be opting to hold off on revealing any sort of opening date in order to not make promises they can’t keep.

Another reason Disney may opt for delaying an announcement of an opening date for these projects may be that they are remaining cautious about the upcoming WDW 50th anniversary celebrations. Already, Guests are planning to be at Disney World on or around October 1, the official date of the 50th anniversary. However, Disney has not yet shared when those celebrations will begin or how long they will last. It’s possible that the company is opting to open these new restaurants and attractions during months that coincide with the beginning of the 50th anniversary festivities. But right now, it’s too soon to tell.

At this time, it’s unclear how far of schedule these projects are. We know that the temporary closures of the Disney World theme parks — from mid-March to mid-July — caused a delay in the construction of some projects. And it’s not yet known how close Remy’s Ratatouille Adventure and the France pavilion expansion, Guardians of the Galaxy: Cosmic Rewind, and Space 220 are to completion. We know we can expect the new offerings in France, including the new Remy’s Ratatouille Adventure ride, as well as Space 220 to open in 2021, for example, but an exact opening date has not yet been announced.

Related: How Disney Parks Adapt in These Tumultuous Times

Finally, a third reason why Disney may be keeping quiet about the opening dates of the new EPCOT offerings is rather simple: it’s possible that they simply do not know. We can’t rule out the possibility that Disney does not yet know exactly when these projects will be finished. And, even if they do think they know, with all of the uncertainty in the world right now, maybe they are anticipating the opening dates could have to change.

Still, as huge Disney fans, we look forward to experiencing these new offerings whenever they are able to open. And we’ll wait — even impatiently — for more news to come.

Comments Off on EPCOT Transformation: When Will the New Projects Debut?