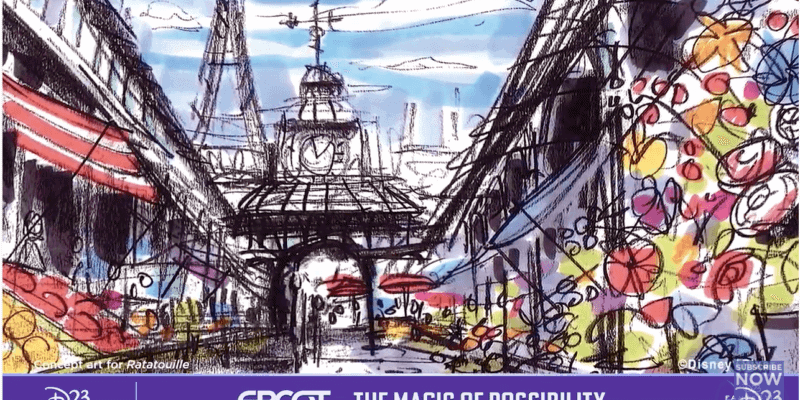 It is now confirmed that when Guests walk towards Remy’s Ratatouille Adventure, they will experience a deleted scene from the movie.

During the D23 virtual event, “EPCOT – The Magic of Possibility,” Pixar’s Roger Gould and Harley Jessup and Tom Fitzgerald from Walt Disney Imagineering made an appearance to share more details about the ride, specifically the differences between how the attraction is experienced compared to its sister at Disneyland Paris, and the movie Ratatouille itself.

The trio explained that the most significant changes from both the movie and the attraction in Walt Disney Studios Park will be experienced in the new expanded area just outside the ride itself.

In fact, the stage will be set that Guests will get to live an actual deleted scene that never made it into Ratatouille!

“What I like,” said Jessup, who was the production designer on Ratatouille, “in the new attraction is you [Fitzgerald] included something that we wanted to get into the film. The sort-of marketplace pavilion structure… based on the old Parisian marketplace. We had a scene like that in the film and it got cut. But now to see that in full-size at EPCOT is amazing!”

This will be a scene from the film that Guests will walk through themselves as they make their way to the entrance of the attraction. Fitzgerald explained that “this canopy will provide a transition for us from the more real architecture of Paris to us stepping into the more stylized fantasy architecture of Ratatouille.”

All three creatives confirmed that Guests will be transported to Remy’s Paris which is not the “real” Paris, but a more romanticized and stylized version that he sees and what is shown in his movie.

There will be even more immersive elements that bring Guests into the world of Ratatouille before they even get on the ride, expanding the World Showcase Pavilion into what Fitzgerald unofficially classifies as a mini-land in itself.

Remy’s Ratatouille Adventure is scheduled to open at Walt Disney World Resort in 2021. No specific date has been announced.

You can watch D23’s full EPCOT segment by clicking the link below: