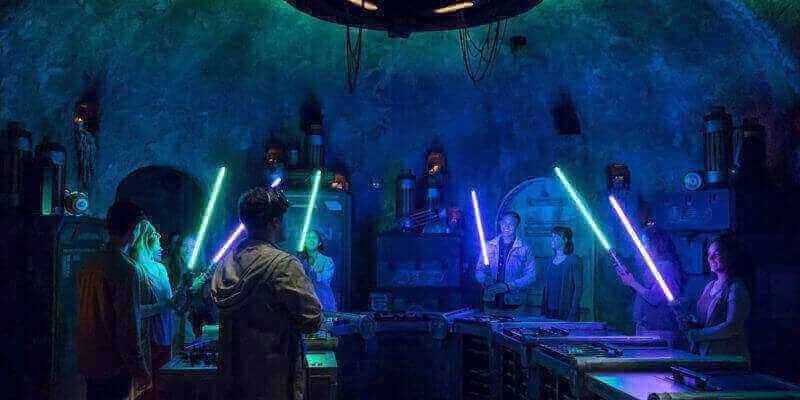 For many fans of the galaxy far, far away, Star Wars: Galaxy’s Edge at Disneyland and at Disney’s Hollywood Studios at Walt Disney World is a dream come true–a place where immersive Star Wars-themed experiences lurk around every corner.

With state-of-the-art immersive attractions like Millennium Falcon: Smugglers Run and the newly-opened Rise of the Resistance, Guests are transported to that galaxy, to the outer rim and beyond. And now fans will be able to enjoy pieces of Galaxy’s Edge even when they’re not in the parks.

Galaxy’s Edge merchandise will begin to pop up in Star Wars-themed video games, TV shows and films. Fans of the video game Jedi: Fallen Order who have also visited Savi’s Workshop inside Galaxy’s Edge may have noticed that the game allows them to recreate the same custom lightsabers that they can create at Savi’s Workshop. And Brad Schoeneberg, head of Global Merchandise Franchise work for Star Wars and Marvel, says the lightsabers are just the tip of the iceberg.

“Fallen Order was the first of the other places where you see those stories; it’s not just Savi’s,” he explained. “We have products that showed up in Episode 1 of The Mandalorian [and] I just sent another round of products to The Mandalorian for Season 2.”

Schoeneberg says fans will continue to see “everything embedded in this broader storytelling.”

This is different from the scenario with Pandora at Disney’s Animal Kingdom. Bows and arrows featured in Avatar have made their way to the World of Avatar section of the park. But when it comes to merch at Galaxy’s Edge, the items started out in the new Star Wars-themed land and then made their way quietly into other media from the galaxy far, far away.

Schoeneberg described the creative processes behind the designs of the lightsabers that can be crafted at Savi’s Workshop.

“Working on with Doug Chiang [Vice President and Creative Director of Star Wars] on the design of the lightsaber pieces for Savi’s we designed them in-house with the parks merchandise designers and teams,” he said. “Then we’d go meet with Doug and team. We’d all make changes together with Lucasfilm stories and bring them back.”

Schoeneberg says it was at that point that Chiang said 3D copies of the lightsabers would be needed so they could be used in Jedi: Fallen Order.

“You’ll see them in content coming up and see them kind of take on new life,” he said.

Schoeneberg wasn’t too forthcoming with the details when it came to discussing just what types of merchandise would end up being used also in Star Wars films, TV shows and video games going forward. He wants fans to be able to discover them for themselves.

So for now, fans of the franchise will have to keep their eyes open for Galaxy’s Edge merch in upcoming films and shows. Maybe we’ll see something in The Mandalorian other than Baby Yoda–something inspired by Galaxy’s Edge.

Have you made a lightsaber at Savi’s Workshop at Galaxy’s Edge? What merchandise do you hope to see as props in upcoming shows and films? Let us know in the comments.