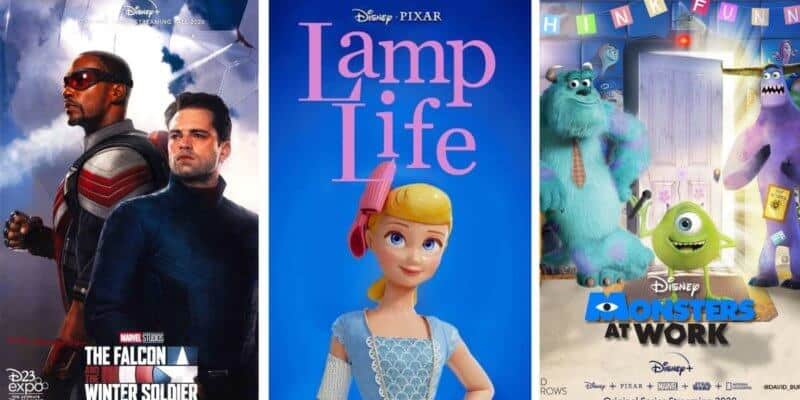 As some of the Disney+ series seasons come to an end, subscribers are wondering what other Disney+ Originals series and films will be hitting the streaming service come the new year.

Well, we can tell you that Disney has already announced several movies and television series for 2020, but keep your eyes peeled because we know there are many more projects coming to Disney+ that haven’t yet been announced.

In the meantime, let’s get prepared for the new year and take a look at the schedule thus far.

Diary of a Female President

This Disney+ Original series will follow a 12-year-old Cuban-American girl as she navigates middle school and as she follows her dreams of becoming the future president of the United States. The series will be told from the narration of her diary.

Gina Rodriguez (Jane the Virgin) and Emily Gipson (I Can and I Will) will executive produce alongside Ilana Peña (Crazy Ex-Girlfriend).

This upcoming series will follow two Marvel Cinematic Universe superheroes –Sam Wilson (The Falcon) and Bucky Barnes (The Winter Soldier). The Falcon and The Winter Soldier will take place after Avengers: Endgame and is guaranteed to be filled with action and adventure.

Monsters At Work is inspired by the Disney Pixar film Monsters, Inc. and will follow an ambitious and clumsy monster named Tylor Tuskmon (voiced by Ben Feldman) who is set to follow his dream job as a Scarer when the news hits that instead of screams, Monsters, Inc. will now be collecting the laughter of children to fuel the city.

If you love Disney inspired weddings, then you will love Disney’s Fairy Tale Weddings, which will give viewers a behind-the-scenes look at some of the weddings and engagements at Disney Destinations around the world.

If you love Star Wars and want to put your knowledge to the test, you’ll want to play along with the upcoming Star Wars: Jedi Temple Challenge. This game show will test young contestants and their abilities in the core Jedi principles, including strength, knowledge, and bravery. They must face off in exhilarating and thrilling obstacles to achieve the rank of Jedi Knight.

Bob Woodruff takes us along for the ride as he travels the world with his 27-year old son, Mack. The duo visits several places on an average tourist’s bucket list and discovers hidden secrets and surprises.

Howard Ashman is the man behind Disney classic lyrics from Aladdin, Beauty and the Beast, The Little Mermaid as well as the creator of musicals including Little Shop of Horrors. The upcoming film, Howard, will follow the untold story of Ashman.

You may remember the 2018 film, Love, Simon, and now Disney+ is creating a series adaption of the film. Love, Simon will be set in the same world as the film as a new student must conquer his own journey of self-discovery while moving into a new city and attending a new school and facing challenges at home.

When everything seems a bit overwhelming, he decides to reach out to Simon to seek help.

This new Disney+ competition series will feature teams of inventive students who will be tasked with designing, building, and testing new contraptions.

Everyone’s favorite chipmunks will return to the screen in a brand new 21st-century cartoon classic. The duo is now living in a small park in a very busy city and soon realize they must take on a world much bigger than them.

If you saw Toy Story 4, you know that Bo Peep made her big comeback but now she will star in an all-new animated short film, Lamp Life. Bo Peep will finally answer questions about where she was and what she was doing since Toy Story 2.

(Re)Connect will follow a new family in each episode as they disconnect from their busy lives and devices in order to address a very relatable issue that seems to be coming between them.

Have you always wanted to create the next Disney Parks dish? Well, thanks to Be Our Chef, hosted by Angela Kinsey, now you can. Each episode will follow two families as they compete and take on a themed challenge. The finalists will have to apply everything they learned in order to create a dish that represents not only their family but Disney as well.

Disneynature will dive deep under the sea to engage with one of the world’s most beloved animals — Dolphins.

Into the Unknown: Making Frozen 2

Walt Disney Animation Studios is opening its doors for the first time ever as they allow cameras to show how the team of directors, artists, and the voice cast create Frozen 2.

Did you know that there is a team of more than 1,000 highly respected animal-care experts, veterinarians and biologists who perform amazing work at Disney’s Animal Kingdom each and every day? Well, National Geographic is now showcasing these workers and will allow viewers to see behind-the-scenes of how these workers operate.

According to IMDB, this is an “anthology documentary series that explores the historical, cultural and societal impacts of the Marvel Comics Universe and its intersection with the world.”

The Muppets are bringing laughter and joy to Disney+ thanks to their first-ever unscripted short-form series, Muppets Now.

This Disney+ Original will tell the story of a 10-year-old comic book fan, Flora. She saves a squirrel who she names Ulysses and soon finds out its unique powers cause a bit of commotion in a series of funny and entertaining adventures that change Flora’s life and outlook forever.

The Phineas and Ferb Movie: Candace Saves the Universe

Phineas, Ferb, and their older sister, Candace, are returning for another adventure in the upcoming Disney+ Original film, The Phineas and Ferb Movie: Candace Saves the Universe.

Sam (Peyton Lee) is a rebellious princess who is second in line to the throne of her kingdom, Illyria. Sam soon realizes that she has superpowers and she actually belongs to a secret society.

Based on the critically-acclaimed, New York Times’ best-selling young adult novel, Stargirl will follow a high schooler who finds himself drawn to the new girl.

The new Disney+ Original is based on the best-selling book of the same name. Get ready for lots of laughs as you follow along with the quirky hero, Timmy Failure, and his 1,500-pound polar bear partner.

This series will bring viewers behind-the-scenes to get a unique look at the props and costumes from some of your favorite films including Pirates of the Caribbean: The Curse of the Black Pearl, Mary Poppins, and Who Framed Roger Rabbit?.

Which Disney+ Original are you looking forward to watching in the new year? Let us know in the comments.