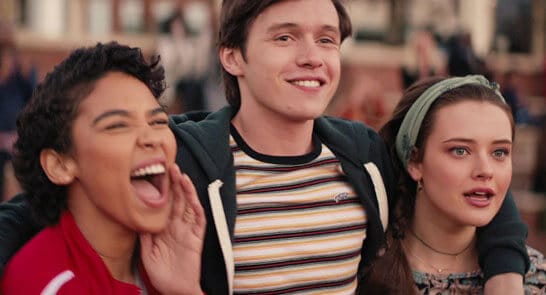 “Love, Simon,” the popular romantic teen comedy-drama movie from 2018, is getting a TV series sequel on Disney+, according to The Hollywood Reporter.

“Love, Simon” was based on the novel “Simon vs. the Homo Sapiens Agenda” by Becky Albertalli. The book’s sequel, “Leah on the Offbeat,” has been given a straight-to-series order for the Disney+ streaming service, which debuts on November 12. Leah (played by Katherine Langford in the movie) is one of Simon’s best friends. “Leah on the Offbeat” follows Leah “as she handles subjects including friendships, relationships, body image, sexuality, self-esteem, college and feeling like an outsider,” says The Hollywood Reporter.

The movie was the first major studio project targeted at teens to feature a gay romance, and it grossed $66.3 million worldwide. It was produced by the Fox 2000 studio, which was closed after the Disney-Fox merger. Here’s the film’s synopsis:

Everyone deserves a great love story, but for 17-year-old Simon Spier (Nick Robinson), it’s a little more complicated. He hasn’t told his family or friends that he’s gay, and he doesn’t know the identity of the anonymous classmate that he’s fallen for online. Resolving both issues proves hilarious, terrifying and life-changing.

Along with Robinson and Langford, “Love, Simon” starred Jennifer Garner and Josh Duhamel as Simon’s parents. Keiynan Lonsdale, Alexandra Shipp, and Jorge Lendeborg Jr. played Simon’s friends. The TV series will feature a new cast, but screenwriters Elizabeth Berger and Isaac Aptaker will return to serve as showrunners. Director Greg Berlanti will not be involved due to an exclusive overall deal already in place with Warner Bros. Television.

Disney hasn’t commented on the “Love, Simon” TV series yet, and the show wasn’t included in the Disney+ lineup revealed last week. Whenever the show premieres on Disney+, it will join an already exciting lineup of scripted and non-scripted series, plus many favorites from the Disney library of movies and TV shows. Disney+ will cost $6.99 per month when it launches later this year.

Comments Off on “Love, Simon” TV series in the works for Disney+