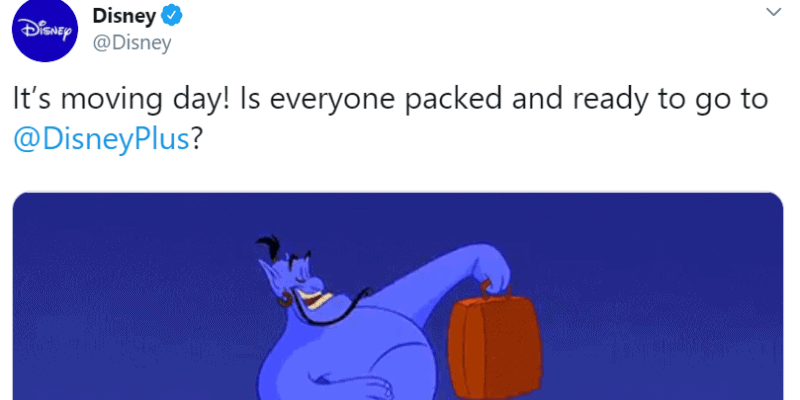 It isn’t everyday when your favorite Twitter accounts interact with each other online. But like we’ve mentioned lately, it’s a great time to be a Disney fan, and this Twitter conversation is proof.

To celebrate Disney+ and welcome the streaming service to social media, several Disney-owned accounts took to Twitter to share their excitement. What started out as the official Disney account Tweeting about how it’s time for Disney content to move to Disney+ soon turned into an epic social media thread of several Disney-owned accounts joining the fun.

The chain started with Disney and the Twitter thread continued with Pixar, National Geographic, Marvel Entertainment, The Avengers, Star Wars, Guardians of the Galaxy, Disney+, and even The Simpsons. Take a look:

It’s moving day! Is everyone packed and ready to go to @DisneyPlus? pic.twitter.com/bAFxRjT5aY

Maybe we can help! Have you tried looking in shallow, tropical reefs of the Indo-Pacific? That’s where you’ll find paracanthurus hepatus. Just don’t get confused with acanthurus leucosternon or acanthurus coeruleus – they all are known as blue tangs! pic.twitter.com/Mq1BKGBxy0

Hang tight. We have quite a few suits here. pic.twitter.com/5jGryAPItk

Looks like you’re in need of some transport, you scruffy-looking nerf herders. Welcome aboard the Millennium Falcon, @Marvel! Any more crew expected? pic.twitter.com/VPF1aSICXg

Don’t worry, she may not look like much, but she’s got it where it counts, kid. Prepare to make the jump to lightspeed! pic.twitter.com/iovNCVcy3o

The epic Twitter thread came at around the same time this morning as Disney+ shared a promotional video to social media channels as a way for the streaming service to introduce itself.

Someone asked us to formally introduce ourselves so of course we made a video. pic.twitter.com/VZLrJ6ff7k

Given the “mind blown” emoji the streaming service is using in the description of its Twitter and Instagram accounts (and the fun social media threads it has already been part of), we wouldn’t be surprised if Disney decided to create a fun and contemporary social media presence for Disney+. Disney is known for creating more millennial-driven content on its official social media accounts for the Freeform channel. Plus, with Netflix being known for creating similar conversational content on Twitter (and even sharing hilarious and relatable gifs), we wouldn’t be surprised of Disney wanted to go with a similar approach with Disney+ social media.

Just take a look at some of the funny captions Disney+ has already shared on Instagram:

Be honest, how many first dates are actually like this?

Us after a long night out.

You don't know the power of the dark side until someone wakes us up from a nap.

We still have to wait a few months to get access to Disney+ since it doesn’t launch until November 12, but by the looks of the streaming service’s new social media presence, we can follow along on Instagram and Twitter to get our Disney+ fix for now.

What do you think of Disney’s epic social media thread in celebration of Disney+? Let us know in the comments!