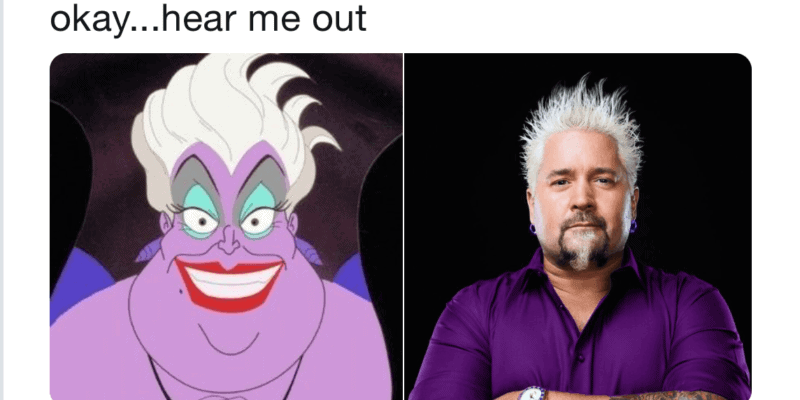 The news of the casting of Disney’s live-action version of “The Little Mermaid” has been all the buzz, causing many stars to try to get in on the under-the-sea magic of the new film. And now we can add celebrity chef Guy Fieri to this star-studded list, who fans on social media believe would be perfect for the role of Ursula!

For those curious, the idea that this celebrity chef should take on the role of the sea witch all began last week on Twitter. User @domcorona first sparked the idea when he shared side-by-side comparison pictures of both Ursula and Fieri with the caption “okay…hear me out.”

We must say, from the comparison pictures Dom shared, the resemblance is there! In the image, it’s very obvious that both stars share similar hair styles and with Fieri’s purple shirt, it almost makes him a perfect match to the famed Disney villain.

And funny enough, only a day after Dom’s tweet went viral, the chef replied to the tweet with the perfect response–quotes from the original film’s “Under the Sea” song! Now this isn’t a yes from the chef. However, it also isn’t a no either.

We got no troubles ?
Life is the bubbles ?
Under the sea ? https://t.co/SlepakSULp

Disney has not commented on the idea of Fieri taking on the role. However, Fieri isn’t the only star that’s been connected to the role of Ursula as it’s been reported that Melissa McCarthy is already in talks to play the role.

Although, McCarthy may not have sealed the deal just yet as rapper and actress Lizzo has shown great interest in the role as well through Twitter. The rapper recently retweeted a video of her from last year made up as the underwater witch singing “Poor Unfortunate Souls.” In the tweet, she included an emotional sad eyed emoji. In another tweet, the rapper included the same sad emoji and a link to an article stating McCarthy was up for the role.

What are your thoughts of Guy Fieri possibly taking on the role of Ursula in Disney’s live-action version of “The Little Mermaid”? Let us know in the comments below!