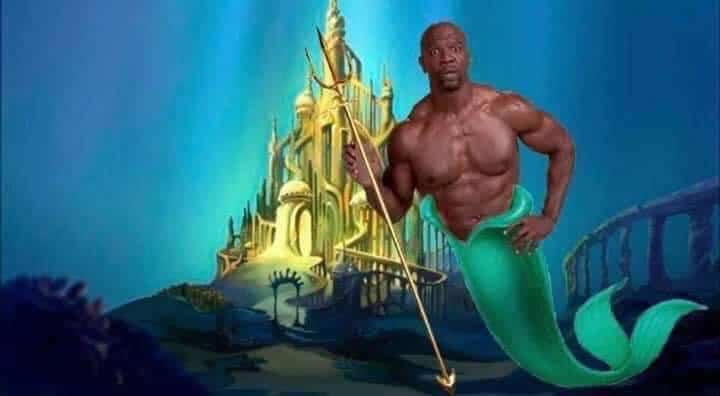 We’ve been wondering who will play the iconic role of King Triton ever since Disney announced Halle Bailey will star as Ariel in the upcoming live-action “The Little Mermaid.” And while fans have suggested numerous actors as possible contenders for the role, one actor has decided to nominate himself: Terry Crews.

Not long after the internet erupted in mixed opinions over Bailey’s new role as Ariel (and after Disney issued a response), Crews took to Twitter to share his version of an all-new King Triton…himself. The image Crews shared is a photoshopped graphic of Crews’s upper half of his body attached to King Triton’s merman tail. He even seems to have posed on purpose for the image, with one hand on his hip and the other positioned perfectly to “hold” King Triton’s trident. The image even shows Crews set in front of a backdrop of Atlantica, King Triton’s underwater mer-kingdom from the original animated film. It seems like all that’s missing is his crown.

As soon as Crews shared the Tweet, fans responded in an outpour of positive affirmations that Crews is fit for the role. Some said Disney could have all their money if they cast Crews, while others said Crews needs to be cast in the role even if it doesn’t make sense. Here are some of Twitter users’ reactions to the possibility of Crews as King Triton:

They cast a black girl as Ariel in the new Little Mermaid, and now I’m just trying to figure what super buff black guy is going to play her father. Terry Crews? Terry Crews as King Tritan?

Great, now I'll hate if anyone else gets the role. It HAS to be you, @terrycrews !!!

If you play Ariel’s dad, Disney will have my money. ?%.

Well okay, but only if there's a scene where he beats up Ursula using nothing but his pecs

So when are we starting the petition?

In addition to Crews, several other celebrities are vying for roles in the upcoming live-action version of “The Little Mermaid,” from singer Lizzo wanting to portray Ursula to actor and singer Todrick Hall suggesting he should play Sebastian. Hall posted a lengthy Instagram caption sharing his thoughts on the racist reactions to Bailey being cast as Ariel in the new movie, sharing how he and other minorities feel about the lack of representation in Hollywood, and namely in Disney films of the past. At the end of Hall’s caption, he asks if he can be Sebastian…and we know we’re not alone in wanting Hall’s wish to come true.

Message to all you “NON-RACISTS” out there covering their racism by pretending to be hair color purists. I know that my opinion is going to be swayed because I'm African American but I just have to say that as a HUGE Disney fan I always wished that there was more representation of not just black people but any other race. I think it was problematic for EVERY single Disney princess to be white to begin with but when Aurora, Snow White & Cinderella were created we were still having to eat in separate parts of restaurants. Art should reflect the times and If white people get Elsa, Anna, Sleeping Beauty, Cinderella, Merida (who also has red hair), Snow White, Belle, Ariel & Rapunzel it seems a bit entitled to compare the fact there is one princess for Native Americans, blacks and asians is enough. And we all know that the Princess and the Frog was nothing in comparison to those classic movies that were made with Disney's all star Dream Team. And also the one black Princess WAS A FROG THE WHOLE FUCKING MOVIE. Also, she's a mermaid and it's 2019…If they can CGI Margot Robbie's face onto an Olympic figure skater's rotating body, I think they can handle giving a black girl red hair. It could actually be beautiful, but either way, that seems like such a small detail to harp on. I know it's probably a hard concept to grasp, but this is how minorities have felt for the past thousand years and we've just had to deal with it. Fun fact for you also, There are over 60 Disney animated films and only 8 of them STAR people of any other race than white The Jungle book, Moana, Coco, Princess & the Frog, Pocahontas, Mulan, Aladdin, Lilo & Stitch so in the words of my good friend Taylor Swift…you need to calm down. If they were to all of a sudden decide to do Cinderella and cast a man as Cinderella and have a gay prince, it would be ridiculous for people to fight and try to compare the representation because there has NEVER BEEN A GAY PRINCE. People were mad that Brandy was cast as Cinderella and guess what? She was great and the world moved on. I think we can give Halle Bailey a shot at finally being part of “your world” you RACISTS. ALSO, can I be Sebastian ? Thanx bye

Disney hasn’t publicly responded to Crews, Lizzo, or Hall about the characters they each want to play in the upcoming film, but we’re still holding out hope that at least one of these three celebrities can have their Disney movie dreams come true.

Do you think Terry Crews would make a good King Triton in “The Little Mermaid”? Let us know in the comments!