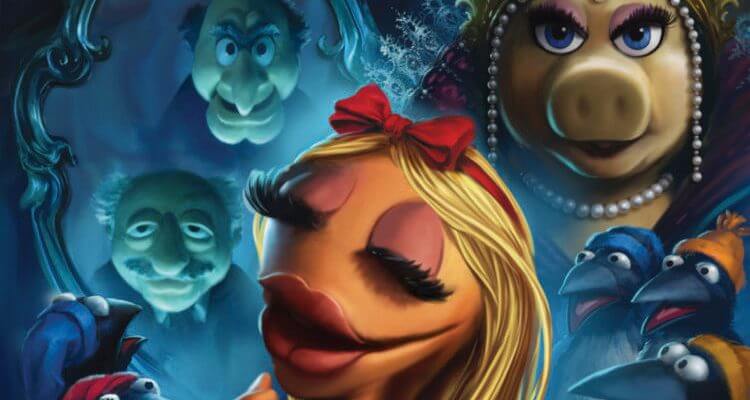 The Muppets take on classic fairy tales in the new book “Muppets Meet the Classics: Fairy Tales From the Brothers Grimm.”

The collection of short stories, written by Erik Forrest Jackson, stars Kermit the Frog, Miss Piggy, Janice, Statler and Waldorf, and more, as they tell the tales of Snow White, Cinderella, and other classics — with a Muppet twist, of course.

Here’s a look at the cover with illustrations by Owen Richardson: Kermit the Frog takes center stage for one story, called “Kermit the Frog-Prince,” inspired by the Brothers Grimm tale “The Frog Prince.” You can read that story in full below, courtesy of Oh My Disney.

One fine afternoon, young princess Piggy took a walk in the forest in her bonnet, dirndl, and clogs. She carried with her a golden hacky sack, for hacking was her favorite hobby. For hours at a time she would bounce the little bean-filled bag from foot to foot. She had made an effort to play with it less, but alas, she couldn’t kick the habit.

After a time, she came to a well in the woods she’d never seen before. She peered over the low row of bricks encircling it and gasped at her reflection. “A bonnet, dirndl, and clogs!? On moi!?!” she exclaimed, aghast. “There are literally zero pictures of the Swiss Miss cocoa girl on my inspiration board! Moi’s contract specifically said Prada would design all my outfits! Where’s what’s-his-name—that stage manager guy? Tell him I’m calling my agent.”

So startled and distressed by her disagreeably dowdy appearance was she that the princess accidentally dropped the hacky sack and down it fell. Plop! It disappeared into the inky water, which, like her appetite, seemed bottomless. She considered jumping in after it, but then she remembered that creepy girl from the Ring movies and nixed that idea entirely.

Looking longingly into the well, she sang, “I’m wishing, for the one I love . . .” Then she bemoaned her loss, crying out, “If I could only get my hacky sack again, I would give everything I have in the world!” Whilst she was wailing, something swung overhead from a vine. She thought she was hallucinating till she heard a strange noise from behind her. Piggy thought it sounded like a “ribbit.” She turned: the creature crouched on a low branch was not a frog, but a monkey covered in brown fur, wearing a mustard-colored vest and tie!

The primate said in the politest of voices, “Uh, hullo there. What are you crying about?”

“My golden footbag has fallen into the well and I am positively gutted.” She moaned. “I mean, I’m a princess! The laws of gravity aren’t supposed to apply to moi.”

“Maybe I can help? I’m still getting used to this body but—”

“Still getting used to your body? What does that even mean?”

“Uhh, look, I’m forbidden to say more, but if you promise that you’ll protect me, and let me visit you in your palace three times, and each time have a little food off your golden plate and a comfortable rest, well, then I can bring your hack back.”

“Let you into my palace? I don’t even know your name!”

Then, delighted, the monkey launched himself off the branch and dived deep under the water. After a little while he came up again, the footbag clutched in a dripping paw.

As soon as the overjoyed young lass had her beloved ball again, she didn’t give another thought to its savior and, without looking back, hacked all the way home.

The monkey called after her, “Princess, wait! Take me with you like you said you would!” But she was already out of hearing range, the hairy helper long gone from her thoughts.

That night, just as the princess sat down to dinner, she heard that strange ribbit noise again out in the hallway. Soon afterward there was a gentle series of taps at the door. From the other side, a familiar voice cried out:

“Open the door, princess dear,
Open the door to the little monkey here!
You must remember the promise you made
By the deep well in the cool forest shade.”

The pig didn’t budge. The king, her father, asked her what was the matter. “A monkey fished my hacky sack out of a well this afternoon. Wow, I think that may be the strangest sentence I’ve ever spoken. I told him that he could visit moi, thinking that he would never find the castle.”
The king, who has so little to do in this story that he doesn’t even get a name, told her, “If you gave him your word you must keep it. Go and let him in.” Before she could respond, the clearly irritated monkey knocked more forcefully and said:

“Open the door, princess dear,
Open the door to the little monkey here!
You must remember the promise you made—”

“All right, furious George, I heard you the first time,” she barked and grudgingly opened the door.

The monkey loped into the room. “Wow, you’ve sure got some nice digs here,” he said, swinging from the chandelier. He dropped down onto the table and made himself quite comfortable between the candlesticks. He surveyed the dishes. “What are you eating, princess?”

“It’s the only thing better than a talking burrito.”

“Adele taco!” [Editor’s Note: we originally had a nachos joke in here, but it seemed too cheesy.]
When he had eaten as much as he could, the monkey said, “Sheesh, I’m getting sleepy. Please carry me upstairs?”

So they walked up together and the princess gave him a little pillow. He slept soundly at the foot of her bed. Now then, she thought when she woke to find him gone, moi will be troubled with that nuisance no more. But she was mistaken, for when night came she heard the same rapping at the door, and the creature who called himself Sal once more said:

“Open the door, princess dear,
Open the door to the little monkey here!
You must remember the promise you made
By the deep well in the cool forest shade.”

And the pig, recalling the advice of her wise father whose name remains unknown, did open the door. The monkey came in, ate, and slept upon the pillow till the morning broke as before. And the third night he did the same.

But when the princess awoke on the following morning she was astonished to see, instead of a monkey, a handsome frog the shade of a ripe pear, standing on two scrawny legs at the foot of her bed and gazing on her with the most beautiful eyes she had ever seen.

“Hi ho! My name is Kermit. Kermit the Frog-Prince!” He took a seat, cross-legged. “It’s kind of a funny story. I was enchanted by a spiteful fairy who changed me into a monkey. I was fated to live in the trees surrounding the well till a princess would agree to invite me over, and let me eat from her plate, and sleep comfortably for three nights. And you, princess,” said the grateful green guy, “have broken the cruel spell. Now I have nothing more to wish for. Except maybe to never eat another banana.” With that he stood to leave.

“Hold on there, buster,” she said, batting her big blue eyes. “I think I should get a little something in exchange, don’t you?”

“Something more than your hacky sack?”

“I’m talking marriage, Kermie. How about toi and moi get hitched. Either that, or I find that fairy and tell her to change you back into a monkey!”

The frog-prince was so relieved to be free of his fur coat that you may be sure he was not long in saying “yes” to her proposal. In time, the princess introduced him to the addictive charms of kicking back and forth her golden footbag. And so the unlikely couple lived—and hacked—athletically ever after.

If you’re hooked on these Muppet fairy tales, you can pre-order “Muppets Meet the Classics: Fairy Tales From the Brothers Grimm” here. The book arrives in stores on October 9.