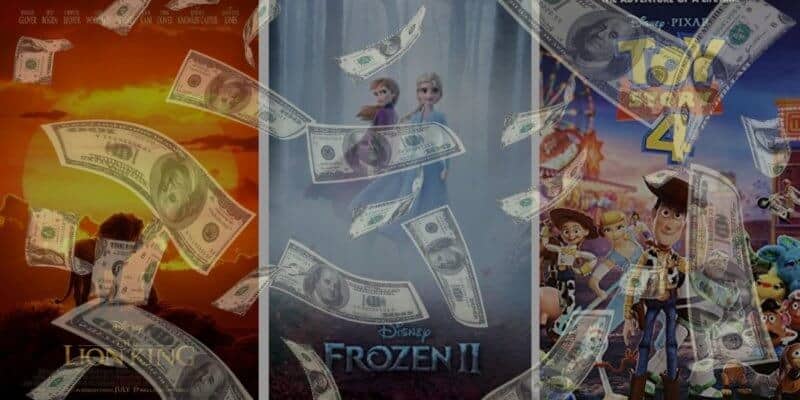 The Walt Disney Company has been setting records this past year.

Disney had a fantastic year in the box office, in fact, the company even broke records thanks to all of their success.

In 2019 alone, The Walt Disney Company made over $10 billion, with Avengers: Endgame being the highest-grossing film of all time. They also had strong performances thanks to the live-action The Lion King, the live-action Aladdin, Frozen 2, and Toy Story 4. And these numbers were recorded before Star Wars: The Rise of Skywalker was released, meaning the company is expected to gross even more before the end of the year.

It’s safe to say 2019 was Disney’s biggest year, so it can be expected to see Disney struggle a bit considering they have to follow these incredible numbers.

In fact, from 2015-2018 the total worldwide grosses stayed in the $6.1-$7.1 billion range, but the question really is — Will Disney repeat its eleven-figure box office numbers in 2020? Or will the company see a significant (possibly over $2 billion) drop in its box office revenue? If the second happens, it would be the first time Disney has a significant drop since Bob Iger acquired Marvel, Pixar, and Lucasfilm.

In the past decade, a majority of Disney’s success was thanks to Star Wars, the MCU, and Pixar. Other than Frozen and Frozen 2, the original animation films haven’t really grossed the same type of numbers as films from Marvel, Pixar, or Star Wars.

Another reason for Disney’s success is the live-action films they have been releasing, such as Beauty and the Beast (2017), The Lion King (2019), and Aladdin (2019), which all grossed over a billion dollars.

Though, there has been the occasional disappointments like the 2019 live-action Dumbo, which only grossed $347 million worldwide, or Solo: A Star Wars Story, which grossed $392,924,807.

Since the franchises that tend to bring in most of Disney’s success are Star Wars, Marvel, and Pixar, fans should look for potential breakout hits here, such as Black Widow, The Eternals, Onward, and Soul.

Black Widow is expected to hit theaters towards the beginning of 2019 in May while The Eternals will most likely hit later on in November.

Onward and Soul could be huge hits for The Walt Disney Company as they have an amazing voice cast including Tom Holland, Chris Pratt, Jamie Foxx, and Tina Fey, but the problem is Pixar’s original films tend to bring in less money than Pixar sequels.

I think it’s safe to say that Disney is going to have a very hard time topping its 2019 records or even coming close to these numbers. But, nothing is out of the question so I guess we will just have to wait and see.

Do you think Disney will have another successful year in 2020, or do you think they will fall short? Let us know in the comments.