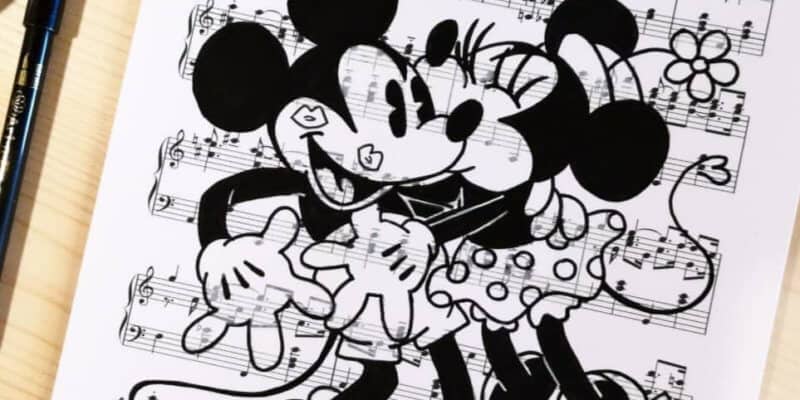 Last month, Inside the Magic introduced you to an Austrian artist named Ursula Doughty, who calls herself Doughty CreARTive. Ursula is the artist who mixed one part Disney and one part Starbucks and created one-of-a-kind Disney-esque Starbucks logos.

Here are a few more of those Disney- and Starbucks-inspired pieces that we didn’t get to share with you last month.

Ursula is a fascinating artist–a Disney fan with a love for all things Disney and a knack for drawing and painting Disney characters that is uncanny. Her attention to detail in her work is unbelievable! Her Disney artwork is so wonderfully different, and the beauty she captures in each piece is simply breathtaking.

Just look at this incredible take on our favorite Frozen duo, Queen Elsa and Princess Anna, dressed up for Halloween as Batman and Robin.

And if you thought her Starbucks artwork was something, you’ll be floored by her Disney sheet music artwork. Just look at this awesome pencil drawing of Bert and Mary Poppins on a sheet of music for the song “Step in Time.”

When she’s not creating Disney- and Harry Potter-themed artwork, Ursula works at a boarding school of an Austrian boys’ choir.

“I am surrounded by sheet music,” the dynamic artist began to share. “During night shifts, I sometimes draw to keep myself awake.”

Doughty says one night she began doodling and scribbling on a piece of sheet music, without realizing she was doing so. “That was the moment this idea was born,” she explained.

Ursula uses only expert colored pencils by Arteza, and she works with MusicNotes.com where she can buy just about any kind of sheet music she likes.

“Especially Walt Disney songs, which I really admire!” Ursula said. She orders sheet music for a song from a Disney movie, and then she draws the characters that correspond to that film, like on this sheet of music for “Mother Knows Best” from Disney’s Tangled on which Ursula drew Mother Gothel and Rapunzel with spot-on detail.

And these pieces inspired by Disney’s Moana are beautiful. You’re welcome.

Or this piece of sheet music for the score for Star Wars that features Ursula’s drawings of Han Solo, Leia, Darth Vader, Chewbacca, C-3PO, R2D2, and Luke Skywalker.

And here, Ursula drew Han and Leia on a sheet of music for “Han Solo and the Princess” from The Empire Strikes Back. She loves him. He knows.

Can you feel the love in these Lion King-inspired creations? We can too!

There’s no denying that Ursula Doughty knows her (Disney) stuff. Her love for the stories and characters in Disney’s most popular films is so obvious, as if it almost drips from each sheet of music on which she draws.

These pieces are music to our ears, so you be the judge and see if these painstakingly detailed pieces of artwork don’t put a song in your heart too! For more of Ursula’s super-creARTive pieces, follow her on Instagram.

What do you think about these impressive pieces of Disney sheet music art? What do you think she should create next? Disney theme park art? More Disney Princess pieces? Let us know what you think in the comments section below!