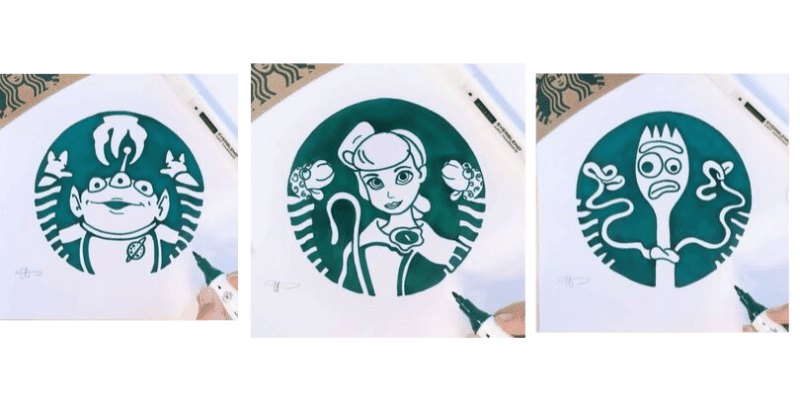 An artist known as“doughtycreARTive” on Instagram has found the perfect blend of her two favorite things: Starbucks coffee and Disney characters.

She says the very first Disney movie she ever saw in the theater was Disney’s “The Little Mermaid.” She loves good coffee and the characters that bring the magic in Disney films.

She says the idea came to her one day as she was traveling by train to Vienna, Austria. She was drinking Starbucks coffee and had nothing but a pencil in her bag.

“I simply combined two favorite things in my life–good coffee and Walt Disney characters,” doughtycreARTive said during our interview with her. “I started drawing when I was a kid and loved it ever since.”

And it shows! Just look at these impressive images she’s created, using the Starbucks mermaid logo as her inspiration.

Her love for Disney characters extends to Pixar characters too! Look at her artwork inspired by “Toy Story 4” with the Green Aliens, Bo Peep, and the toys’ newest friend, Forky.

This gifted mom of two is self-taught. Each image takes her approximately one hour to complete, and her medium is simple–Everblend art markers from Arteza. Could you create these in just an hour? Me neither!

She’s even got a series of Starbucks-inspired Disney villains that includes the Evil Queen, Captain Hook, Ursula the Sea Witch, Jafar, and other favorites.

And no collection of Disney characters artwork would be complete without the Disney Princesses, so doughtycreARTive was sure not to leave them out, and they’re gorgeous in green!

We just can’t get enough of this unique “blend” of Disney Princesses, villains and Pixar characters with the green Starbucks logo. But the Starbucks-inspired artwork created by doughtycreARTive isn’t her only Disney series of artwork–not by a long shot. Want to see more? Follow her on Instagram!

What do you think of these amazing images? Which one is your favorite and which character would you like to see her draw next? Let us know in the comments below!