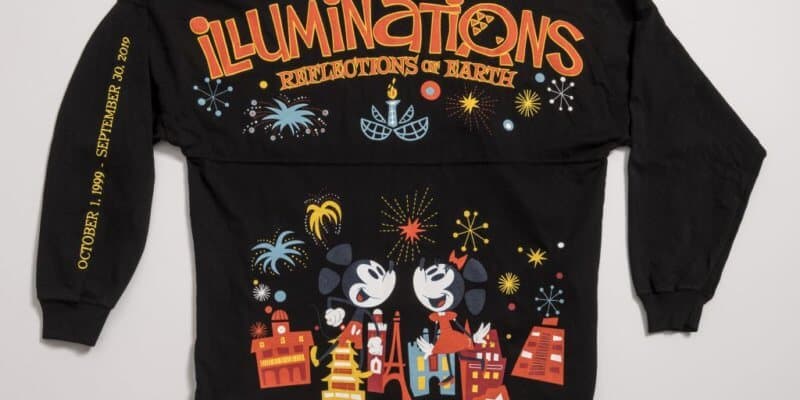 Have you seen the newest spirit jersey available at Walt Disney World? It’s the Farewell to IllumiNations spirit jersey, and we can’t wait to get our hands on one!

We’ve known for months now that the IllumiNations: Reflections of Earth nighttime spectacular at Epcot was on its way out, and that a brand-new nighttime show was on the horizon. This new spirit jersey memorializes Disney World’s farewell to the famed show that had become a Guest favorite over the last 20 years.

Monday, September 30, marks the final presentation of IllumiNations at Epcot. On Tuesday evening, October 1, the park will unveil its brand-new nighttime spectacular, Epcot Forever, which will creatively tell the story of Epcot over time–Epcot of the past, present and future. October 1 is also the 37th anniversary of the opening of Epcot.

Epcot Forever will feature a thrilling musical soundtrack, lights, lasers and other special effects sure to wow crowds gathered around the World Showcase Lagoon. It will be live-streamed that evening online.

Epcot’s new nighttime production is only one of the many exciting changes coming to Disney World’s second park.

At this year’s D23 Expo, many changes were announced for Epcot, including an all-new “Mary Poppins”-themed attraction in the Great Britain pavilion on the World Showcase, a new attraction called “The Journey of Water,” inspired by Disney’s “Moana,” a new Guardians of the Galaxy attraction, a new outer space-themed restaurant and an entirely brand-new take on what is currently Future World.

Planning on purchasing a Farewell to Illuminations spirit jersey this fall? Good choice! It’s only available at Epcot, and if you’re looking for a pair of Mickey or Minnie ears to complement your jersey, look no further than the new Epcot Forever Minnie ears headband! It’s just one piece of new Epcot Forever merchandise coming to the parks very soon!

Are you sad to see IllumiNations leave Epcot, or are you excited about the new Epcot Forever show? What other changes are you looking forward to at Epcot? Let us know in the comments section below!