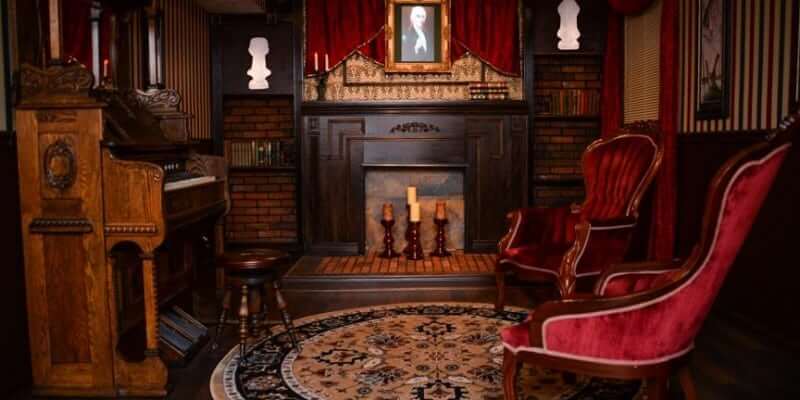 I recently had the privilege of chatting with life-long Haunted Mansion fan Josh Brown.  After admiring a few of his happily haunted homemaking (photos he posted to Facebook), I had to see more.

As Madame Leota was off to regions beyond, we contacted Josh directly to ask him about his wall to wall creeps… I inquired as to how he first found the phantom fever:

“When I was 11 years old, on our second trip to Walt Disney World, my grandparents sent me off on a sort of day camp called Wonders of Disney. It was sort of a class that focused on animation, but during that day the tools is too the Magic Kingdom, and particularly the Haunted Mansion. Before we went in, they were telling us fun facts or whatever about the ride, and the guide explained how Pepper’s Ghost works. That flipped a switch in my 11 year old brain that was like, ‘Oh my god, I could do this.’ (Naive to say the least). I got a little obsessed.” Obsessed-maybe; talented – most definitely; the Frankfort, KY automobile assembly plant worker skillfully crafted many of the spirited specialties in this haunted mansion inspired basement. From the stripes of the stretch room to the iconic eye wall paper, the walls in this bewitched basement are all hand painted.

There’s a clock in the bathroom that he hand carved to resemble the grandfather clock just outside Leota’s séance room. Speaking of the floating seer, she’s more than adequately represented by a projection effect Josh put together.

“I made Leota, which is a video projected onto a Styrofoam wig head inside of a crystal ball. The projector is hidden behind the spell book. She plays on a loop that restarts every 7 minutes.” He also built the fireplace (complete skull carved corbels to resemble the hall of doors. Other effects include a changing portrait of the mansion’s master. “The Master Gracey changing portrait is a video monitor that plays the transformation over a 20 minute loop, 10 minutes young to old-10 minutes back. That loops from an old iPhone, which is concealed behind the curtain. I sewed all of the curtains.” Josh’s skills include the hand crafted the mansion butler and maid costumes he and his wife are wearing this image. The most recent resident of this happy haunt is the lenticular wedding portrait his wife had made from one of their wedding images.  However, his favorite pieces are the stretch room portraits, as they have a significant sentimental value for the couple.

“They were my first pieces. My then girlfriend, now wife and I were living in an apartment, we didn’t have much money, and she got them for me for my birthday. We hung them up in the apartment it was awesome. Then the neighbor’s apartment across the hall caught fire, caused a lot of damage in our apartment, we had to be rescued from the balcony, but the Stretch Room paintings weren’t damaged.” We have to say that this is an amazing tale of terror survived. The Brown’s have materialized a fiendishly fun ethereal escape in their Haunted Mansion inspired basement. (See – it can be fun below ground).

For this spirited sightseeing tour, we are eternally grateful to Josh and Hannah for sharing with us.

If this has inspired you to create your own happy haunt in your home let us know.