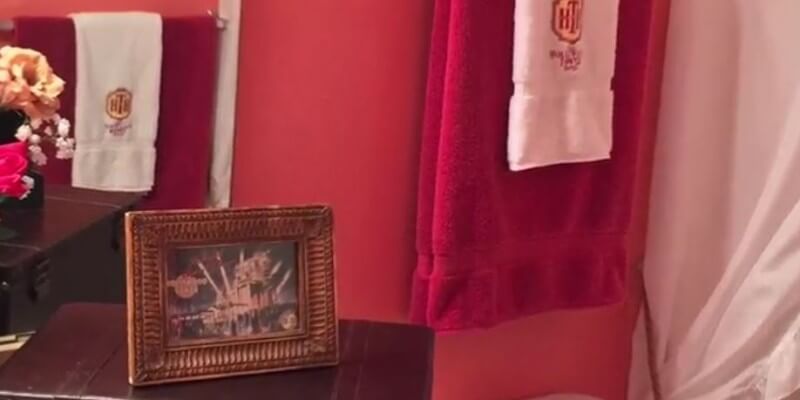 Jed Grabon-Naggar (JGN) is dreamer and a thinker.  He’s also no stranger to themed environments, having worked at both Walt Disney Company (both at Disneyland and Walt Disney World) and Universal Orlando Resort.  Along with his theme park passion, Jed’s entertainment experience includes theater and haunted house work (scenic and special effects).  With this talented resume’ it comes as no surprise that he was able to create some amazingly themed rooms for the Central Florida Condominium he calls home.  ITM is thrilled to be able to share those immersive environments with our readers. . .

HOLLYWOOD TOWER HOTEL inspired Bath
Enter, if you dare, a room filled with rare elements of a bygone television show from a bygone era.  A tribute, if you will, to a time of glamour and glitz and an attraction whose star was the Hollywood Tower Hotel – seen here for the first time on Inside the Magic. . . In this edition of ITM we bring you the imagination and passion of one Jed Grabon-Naggar.  His inspiration being the Twilight Zone Tower of Terror at Disneyland in Anaheim, California, this exquisitely adorned chamber at his residence is well stocked with references to both the attraction and the television show.  Jed advised ITM, “Echoes of the popular jazz tunes heard in 1939 come from the radio on the counter, just as they mysteriously play throughout the abandoned Hollywood Tower Hotel in the parks.”

My first experience with the Tower of Terror was with a sneak preview of the Disney’s California Adventure attraction and I instantly fell in love with its story and design. Having recently moved into a new apartment, I immediately decided to acquire the available merchandise for my bathroom, and that’s when I began to understand and appreciate the concept of themed interior design. I was very limited with space, and wasn’t able to do anything that couldn’t easily be taken down, so I decided to match the red, white, and gold color scheme found throughout the Hollywood Tower Hotel logo for the necessary accessories like the towels and flowers. It was simple, but effective enough to make me realize I had found something I very much enjoyed doing. When I moved out to Central Florida and had the freedom to expand my design, I went as far as I could. Some say I took it to 11. I say I took it to 13. -JGN The intent behind the wall color was to pay homage to the faded mauve of the attraction façade at Disney’s Hollywood Studios but still match my existing color scheme.  -JGN The high shelves littered with artifacts were inspired by the hotel library preshow, incorporating several art deco inspired sculptures and dozens of worldly collectibles from China, Japan, India, Egypt, Greece, and many other countries around the globe. Tucked away among the treasures, guests might find a few nods to other specific details found within the attraction, including mahjongg tiles, a black and white Mickey Mouse doll, and clocks which have all mysteriously stopped at 8:05 PM. Naturally, the shelves also hide a few references to notable Twilight Zone episodes, including the broken glasses from “Time Enough At Last,” the fortune teller machine from “Nick of Time,” the Victoria West envelope from “A World of His Own,” and several others. There are also a few details reminiscent of Hollywood, 1939, such as the Ruby Slippers from The Wizard of Oz and letters postmarked with the current year. -JGN Stay tuned to ITM for one more fantastic pixie dusted delight from this inspired fan.  Up next: Beast’s Library (a Beauty and the Beast inspired Be our Guestroom to die for).