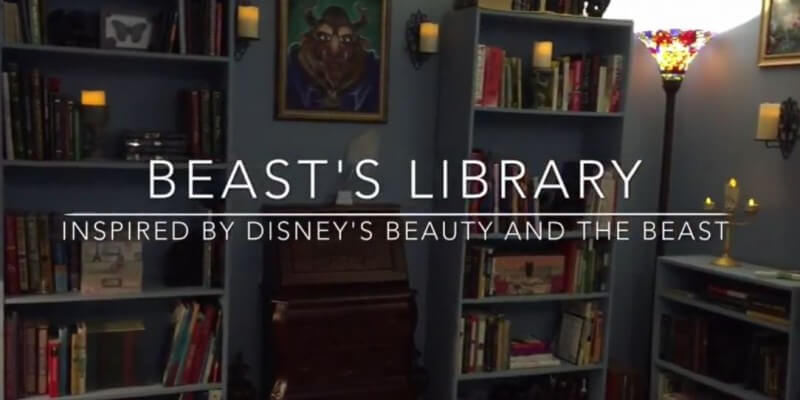 Jed Grabon-Naggar (JGN) is dreamer and a thinker.  He’s also no stranger to themed environments, having worked at both Walt Disney Company (both at Disneyland and Walt Disney World) and Universal Orlando Resort.  Along with his theme park passion, Jed’s entertainment experience includes theater and haunted house work (scenic and special effects).  With this talented resume’ it comes as no surprise that he was able to create some amazingly themed rooms for the Central Florida Condominium he calls home.  ITM is thrilled to be able to share those immersive environments with our readers. .

Beast’s Library
In this final installment featuring the themed rooms of Jed Grabon-Naggar’s imaginative talents, we ask you to be our guest as we explore his “Beauty and the Beast” inspired Beast Library.  ITM had the privilege of chatting with Jed about collection of Disney-inspired theming: ITM: What inspired you to create such an amazing library themed room?

JGN: Beauty and the Beast has been one of my favorite Disney films ever since I first saw it in theatres. Its story, its music, its artwork – all of the elements truly made the movie a masterpiece. My first experience with a Beauty and the Beast themed environment was the Beast’s Library in the Animation Building at Disney’s California Adventure, a fantastic way to bring the story to life, and both that room and my love for the film served as the inspiration for the loft space in my condo. Like Belle, I’m a reader, so the design naturally provided the perfect home for my growing collection of books. ITM: Of all the exciting scenes in Beauty and the Beast, what drew to that room in particular?

JGN: The library at Disney California Adventure becomes both elegant and foreboding as the story plays out. I had no plans to do a similar transition effect in my home, but settled on a color scheme of deep greens and light blues to allow for elegance when lit fully and darkness when appropriate. From there, I set out not to recreate the library exactly as envisioned, but to encompass the feeling of being everywhere in the Beast’s castle at once, drawing inspiration from details found throughout the movie. ITM: You’ve incorporated so many elements of this classic film in your version of the library.  What element would you say is the focal centerpiece of this theme?

JGN: The centerpiece of the room is the enchanted rose above the faux fireplace. Protected under a bell jar, the rose periodically drops petals (potentially to the front or to either side) while figures of Cogsworth and Lumiere look on, hoping to become human again. The Beast’s Magic Mirror (an interactive toy sold with the release of the film) completes the tableau. ITM: Please tell about some of the other iconic additions to this themed room.

JGN: The artwork in the room is reminiscent of the art seen within the Beast’s castle in the movie. Some of the paintings (“Girl with a Pearl Earring,” “The Swing”) were actually recreated in the film’s background animation, while other pieces (“The Unicorn in Captivity”) appear within the Be Our Guest Restaurant at Magic Kingdom. The painting of the Beast is an original work by myself based on the image seen in the Be Our Guest Restaurant. ITM: Stained glass elements are prevalent throughout your décor, please tell us more about these pieces.

JGN: One of the most iconic things about Beauty and the Beast to me is the use of stained glass windows in the prologue and finale. While there are no windows in the existing loft space, I instead found Tiffany-inspired lamps with rose patterns to light the room and still remain true to the look and feel of the film. The Belle Lamp was an amazing find, with silhouettes of the Beast and the Enchanted Objects appearing within the glass. ITM: This delightful den also appears to be a guest room, a nice touch.  Please elaborate on this element.

JGN: For those who’d like to “Be Our Guest” the room was designed for overnight accommodations. The sofa pulls out to a very comfortable air mattress with gold satin bedding (reminiscent of Belle’s gown) designed to make anyone feel like royalty. The sheets even smell like roses! The bedding is kept in the wooden trunk, the emblem of the Beast at the bottom was an addition of my own. ITM: We’re quite sure our readers will notice the magical rose shedding its petals in the video – please tell us more about that.

JGN: Instrumental tracks from Alan Menken’s rich orchestral score from the film fill the library while the fireplace crackles warmly. The sad tinkle of chimes accompanies each rose petal as it falls to join the pile below. People often ask how the effect of the enchanted rose is accomplished. It’s actually there thanks to an old beggar woman who offered me that very rose in return for shelter from the… Nope, not telling. But those who are familiar with the Beast’s Library at Disney California Adventure might find it to be a similar effect. ITM: Thank you for sharing your home with us.  As we wrap up, we are curious: what other themed elements have you incorporated in your home?

JGN: I live in a condominium unit with a large, high-ceiling, open common area, and as these areas serve as the entrance to my home, the thematic design is subtle. My Mickey’s Philharmagic living room is decorated with various Disney paintings and prints, the walls mirroring the rich blue and gold color scheme found in the attraction’s lobby. My Ratatouille kitchen is home to French advertisements for food while a small stuffed Remy provides inspiration from the counter. My Nightmare Before Christmas dining room is lit with iron sconces bearing the likenesses of Jack and Sally as black and white patterned plates with the face of the Pumpkin King hang on the adjacent wall. Each area is fun, giving the discreet impression of the inspiring source. But it’s upon deeper exploration of the house that the real magic begins to stand out. A bit much for the average person, but just right for a fan of themed environments.

Inside the Magic would again like to thank Jed for allowing us into home and discussing his delightful Disney inspired décor.

Do you have a Disney inspired themed area or room in your castle?  Please tell us about in the comments below.