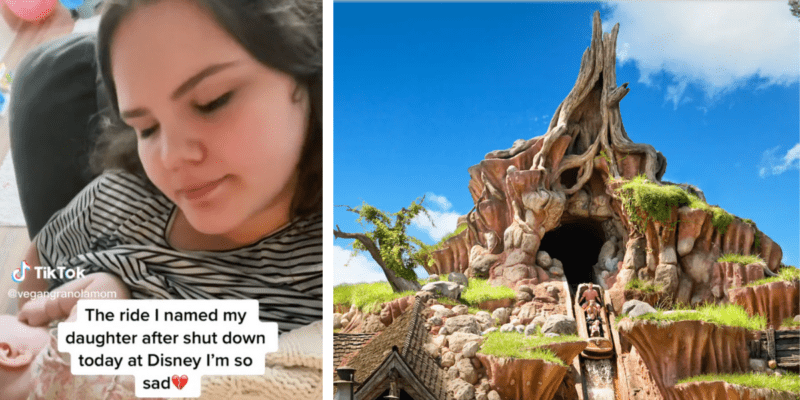 Walt Disney World Resort’s version of Splash Mountain closed for good on Sunday, with Disneyland Resort’s version of the ride to follow soon. The classic log flume ride was based on the problematic and widely banned Song of the South (1946). It will be rethemed to better align with modern American values, despite a petition and #SaveSplashMountain social media campaign.

Princess Tiana will take Magic Kingdom and Disneyland Park Guests on a trip through New Orleans on Tiana’s Bayou Adventure, which will take place after the events of Princess and the Frog (2009). While many Disney Parks fans are excited about the retheme, some are still mourning the loss of Splash Mountain.

One of those Splash Mountain fans is Kara (@vegangranolamom on TikTok). On Sunday, she shared a video of herself with her young daughter, revealing that she named the baby after the controversial attraction:

The video went viral, with many suggesting ridiculous names for the baby, like “Splashton Mountleigh” and “Zippidy Doo Dah.” Kara laughed along with these comments and ultimately revealed that the child’s name was Briar. (As in Briar Patch, not Br’er Rabbit.)

Though Kara commented that she was still excited about the retheme as her favorite Disney movie is Princess and the Frog, Internet users mocked her relentlessly. “Ahh yes, Reconstruction Era, ‘Baby Rera’ for short,” @alehahahahaha said.

A screenshot of the video also made rounds on Twitter, where users were unaware that the baby’s name was Briar and assumed it was taken from racially insensitive aspects of the ride and film. From @Reyeous:

Imagining loving Splash Mountain so much you name a kid after it, but not enough to know it’s being redone to scrub some of that ’50s racism off of it

Imagining loving Splash Mountain so much you name a kid after it, but not enough to know it's being redone to scrub some of that '50s racism off of it

Disney adults are a sickness

Disney adults are a sickness

Would you name your baby after a Disney Park ride?