The Grinch Has a Bone to Pick With Mickey Mouse, “You Just Crossed the Line With Me” - Inside the Magic 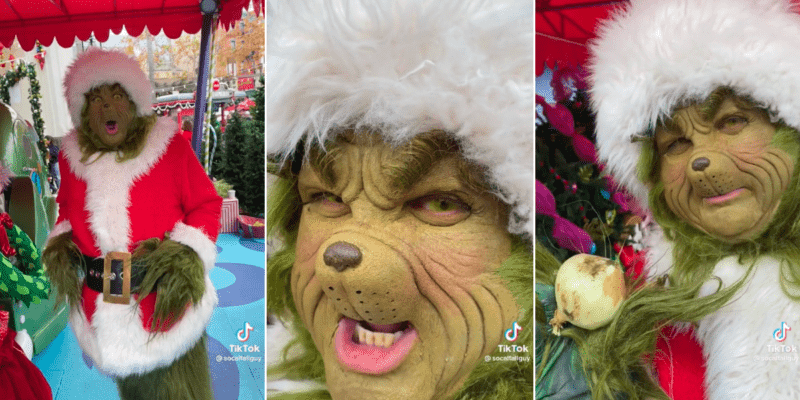 Mickey Mouse better beware as the Grinch recently shared a threat towards the iconic mouse and Disneyland. “You just crossed the line with me,” said the mean green one.

Related: Power Up for the Opening of Super Nintendo World With Everything We Know so Far

However, these interactions can get a little heated, especially when the characters are disrespected by residents of the rival theme park.

Andrew Perez (@socaltallguy) recently shared a feud between the Grinch at Universal Studios Hollywood and Mickey Mouse at Disneyland, with both characters teasing each other through a series of viral videos. In the latest entry of the feud, Andrew and his partner visited the Grinch at Universal Studios Hollywood to show him what Mickey had done with one of his onions. “The rat? What’d he do?” asked the mean green one before the couple showed him the video in which Steamboat Willie — because according to the holiday hater, “we don’t call him Mickey” — threw one of the Grinch’s onions in the trash, which obviously caused him a great shock.

“That’s a line you don’t wanna go down, Willie. You just crossed a line with me, Willie!” said the mean green one before threatening Mickey Mouse and all of Disneyland while at it. “I’m gonna talk to Jack Skellington, okay? The skinny guy with the weird face, dates the corpse girl. Yeah, Imma talk to him. Imma talk to Elsa, Imma talk to Anna, Imma have the whole kingdom froze, you got it? Your dirty old moat, I’m bringing a vacuum gonna suck all the water out and pour it in your stinking ears.”

Fortunately, the couple managed to calm the Grinch down, bringing the onion of discord back from Disneyland. “This is from the actual moat?” asked the hairy character before pulling it out of a bag and commenting, “Oh look Mickey, it’s like your head, deformed,” before taking a big bite out of the controversial present.

The couple then walked to take a picture with the Grinch, who put the onion behind them and added a final strike against Mickey Mouse, saying, “That’s where you go Mickey. Right in the back, where no one cares,” and laughing.

THE FEUD CONTINUES! This is what the Grinch had to say to Mickey! …..Also he eats an onion #universalstudioshollywood #disneyland #grinch #mickeymouse #mickey #themepark

THE FEUD CONTINUES! This is what the Grinch had to say to Mickey! …..Also he eats an onion 🫡 #universalstudioshollywood #disneyland #grinch #mickeymouse #mickey #themepark

The hilarious interaction has racked up over 2.6M views, 355.5K likes, and 2.2K comments since it was originally posted, bringing this year’s feud between Mickey Mouse and the Grinch to an end, as the mean green one has left Universal Studios Hollywood with the end of the holiday season at the Park.

While the hilarious series recorded by @socaltallguy went viral and all Guests, theme park employees, and characters all had a fun time recording the videos, it is important to mention that all characters, regardless of how big their ears are or how hairy they may be, should be treated with respect by all Guests visiting Universal Studios Hollywood and Disneyland Resort.

Have you had a memorable character interaction with the Grinch or another character at Universal Studios Hollywood? Tell us about it in the comments below!