The Grinch Slams "Broke" Disney Employees, "You Brought It On Yourself" - Inside the Magic 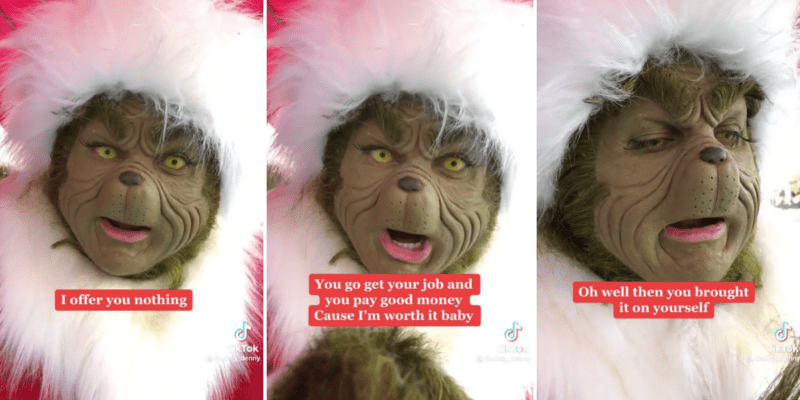 The Grinch kindly offered Disney employees work at Universal, only after slamming them for being “broke.” “You brought it on yourself,” he added.

Related: Power Up for the Opening of Super Nintendo World With Everything We Know so Far

One Guest certainly had an interesting interaction with The Grinch at Universal Studios Hollywood, which turned into a (humorous) attack toward “broke” Disney employees.

The video shared by Denny (@finding_denny) on TikTok shows that The Grinch sends a message to Denny’s friends “who are too broke to buy tickets to come here.” “To all your friends who are too broke, I offer you nothing. You go get your job, and you pay good money ’cause I’m worth it baby,” said The Grinch before being interrupted by Denny. “They work at Disney; that’s why they’re broke,” said Denny, only for The Grinch to respond, “Oh. Well, then you brought it on yourself.”

However, The Grinch kindly offered any Cast Member looking to switch teams a position at Universal Studios Hollywood. “You should come and work here at Whoville, and then you’ll make all the money that I don’t. Okay, let’s do it.”

While the video resurfaced recently, Denny mentioned in the caption that it had been taken “circa 2017” at Universal Studios Hollywood, but with so many videos of hilarious — and sometimes concerning — interactions with The Grinch flooding TikTok this holiday season, it was the perfect time to bring this hilarious video back.

The Grinch is visiting Universal Studios Hollywood for the holidays through January 1, 2023, making Grinchmas at the California theme park the most wonderful time of the year.

Have you visited The Grinch at Universal Studios Hollywood? Tell us about your experience with him in the comments below!

Comments Off on The Grinch Slams “Broke” Disney Employees, “You Brought It On Yourself”