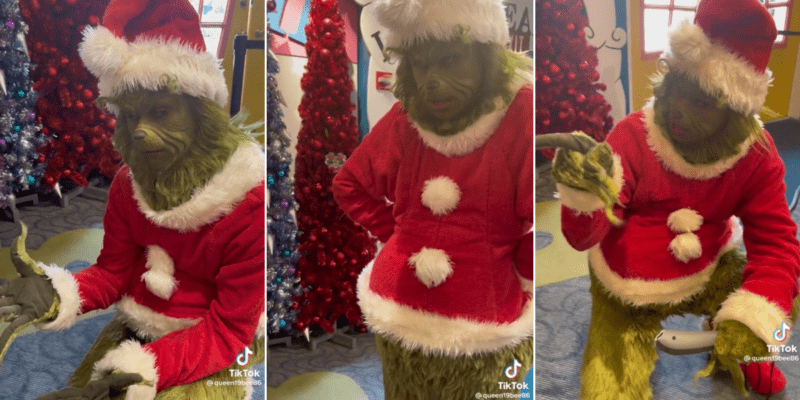 The mean green one terrified a young girl during an interaction at Universal Orlando, reminding her why The Grinch wanted to steal Christmas.

As Universal Orlando Resort celebrates the most wonderful time of the year across Universal Studios Florida and Universal’s Islands of adventure, Guests are eager to experience the spirit of the holidays with breathtaking offerings like the Universal’s Holiday Parade featuring Macy’s, Christmas in The Wizarding World of Harry Potter, and Grinchmas with the citizens of Who-ville and the fan-favorite holiday hater, The Grinch.

While many fans are eager to visit The Grinch at Universal Orlando, a young girl had a less-than-fun experience during her encounter with the mean green one, leaving the spot terrified as The Grinch mumbled in frustration and anger.

The video of this interaction was posted by Brittany Patten (@queen19bee86) on TikTok. In it, we can see a young girl happy to meet The Grinch, although a little shy to interact with the holiday hater at first. After a few words, the girl’s mother tells her to give The Grinch a present she was holding, telling the mean green one that since he’s the Holiday Cheermeister, he gets the first gift of Christmas, making The Grinch visibly nervous.

The hairy character proceeded to open the gift, only to find out it was an electric razor, which clearly didn’t make him too happy. The poor girl froze as “she had no idea what was in the box,” as her mother commented in the video’s caption, and her smile instantly left her face. Her nerves grew when The Grinch pulled off her hat and asked the girl if she wanted a little haircut, making her walk away from the photo spot shaking her head.

“Did you really give me a razor?” Asked The Grinch, adding, “Oh my gosh! Wait till the Who’s get a hold of this. That Mayor, he’s gonna be laughing, oh, his nose off.” Surely The Grinch’s heart shrunk two sizes that day as he passed the unpleasant gift to a Universal Team Member and turned to give the family a nasty look before the video ended.

While the poor girl was terrified after seeing The Grinch’s reaction to the present, which was a surprise to both, the interaction is undoubtedly a memory the family will cherish for life and hopefully laugh about it in a few years.

Have you ever interacted with The Grinch at Universal Orlando Resort? Tell us about your experience in the comments below!