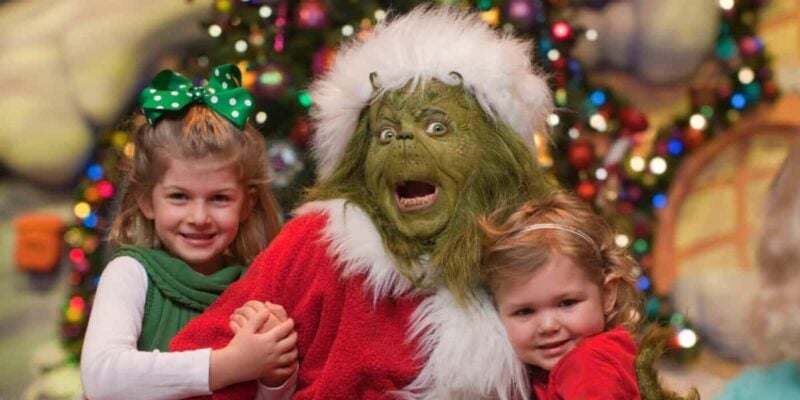 The Holiday festivities are well underway at Universal Orlando Resort for the 2022 season. The Holiday season runs from November 12 through January 1. This means many Christmas shows, new holiday merchandise, and meet-and-greets with fan favorites like the Grinch.

Near the front of the theme park, the Holiday Tribute Store has transformed from its spooky theme for Halloween Horror Nights to an assortment of red and green for the Christmas season. Here, Guests can shop for their Earl the Squirrel merchandise, along with other Christmas-themed hoodies, mugs, etc.

If you’re unfamiliar with Grinchmas , Universal defines it as “warm fuzzies with a side of sarcasm.”

“During the holiday season, Seuss Landing™ is decorated with the holiday charm and cheer of Dr. Seuss’s Who -ville. Get together with the resident Whos and put a little snark in your holiday spirit with the Grinch™. Enjoy the music and fun of The Grinchmas™ Who -liday Spectacular. Plus meet the maven of mischief himself for a photo opportunity. “

Of course, during Grinchmas, Guests can meet Dr. Seuss’s beloved Grinch character, based on the Jim Carrey rendition from the live-action How the Grinch Stole Christmas (2000). A virtual line has been established to help diminish overcrowding in the meet-and-greet area. Make sure to download the UO app to book your spot!

Related: Universal Guests May No Longer Be Able to Meet the Grinch

There are often mixed reactions from kids who meet Mr. Grinch at Seuss Landing. However, one little boy had a particular message to tell the mean one.

TikTok user @5starangel84 captured her son’s adorable experience with the character. Check out the TikTok below.

In the video, the Grinch asks, “you know where Christmas lives? Right there in your heart.” In response, the little boy excitedly points both thumbs at his chest and exclaims, “Jesus puts it in your heart!”

At first, Mr. Grinch starts to say, “that’s right,” but changes his reply to “okay. I agree.” The video cuts off not too long after.

The video has received more than 400,000 views since being posted. Comments flooded with praise and adoration over the encounter. User @emichelle_x3 commented with a quote from the movie, proceeded by three crying emojis.

“And then the Grinch‘s small heart grew 3 sizes that day.”

What do you think about this Grinch interaction at Universal Orland0?