Universal Guest Confronts Character About Explicit Photo - Inside the Magic 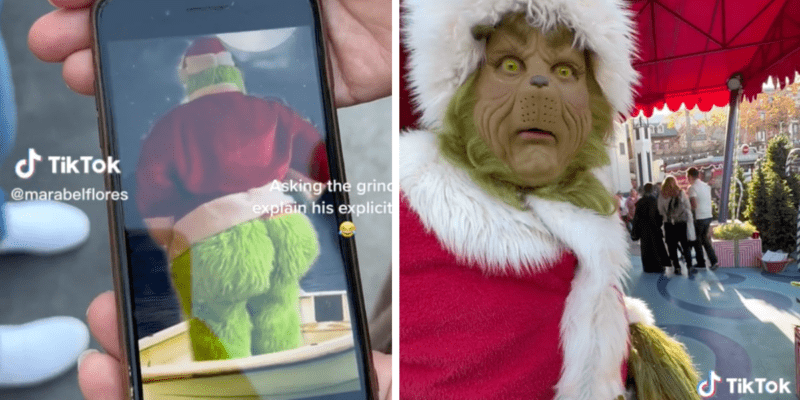 There is nothing like Grinchmas at Universal Orlando Resort and Universal Studios Hollywood. Though Universal’s Islands of Adventure gets more action throughout Seuss Landing, Guests in California still have the opportunity to meet their favorite Who-ville characters.

That version of the Grinch brings snarky seasons greetings to both Universal Theme Parks each year. Some fans line up for hours to meet the sassy green character, who is as unpredictable as he is delightful.

This week, TikTok user Marabel Flores (@marabelflores) shared a video of her encounter with the Grinch, where she showed the character actor a viral edited photo of the Grinch with a very large backside:

“Can you explain this?” Flores asked the Grinch.

“Oh my! How did you get that picture of me?” the Grinch exclaimed. “I texted that to Martha!”

“Martha gave it to me,” Flores cheekily replied.

The interaction ended well; Flores and her party laughed as they headed to pose for photos with the Grinch, who also seemed delighted with the exchange.

The video went viral, receiving over 450,000 likes and thousands of comments. “They did a great job with casting him this year! And he’s bilingual! Amazing,” @veediddythemini wrote.

“I love him,” said @brenttelevision.

Some former Disney entertainment Cast Members have offered a different perspective on videos like this one. They’ve warned that viral videos can reach management and get employees in trouble if they break a minor policy to make a Guest happy.

However, Universal Studios Hollywood and Universal Orlando Resort tend to be more lenient with their character performers – particularly the Grinch. He’s encouraged to be as silly and sarcastic as possible, and this isn’t the first time a Grinch interaction has gone viral.

Have you ever met the Grinch?

Comments Off on Universal Guest Confronts Character About Explicit Photo