"He Got Moves," The Grinch 'Throws It Back' at Theme Park - Inside the Magic 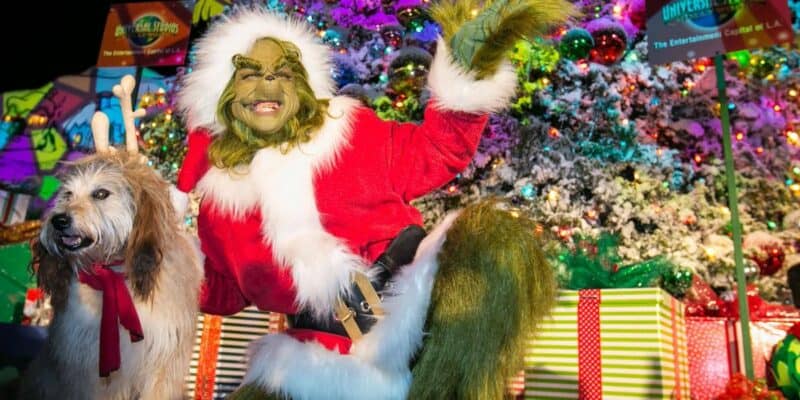 Dr. Seuss’ Grinch character has become a Christmas fan-favorite over time. The famous green icon can be spotted in numerous places, especially as the holiday season rolls around.

The Mean One first appeared in Dr. Seuss’ How the Grinch Stole Christmas!, initially published in 1957.

How the Grinch Stole Christmas! (1957) describes the plot as follows:

“How the Grinch Stole Christmas! is a children’s story by Theodor “Dr. Seuss” Geisel written in rhymed verse with illustrations by the author. It follows the Grinch, a grouchy, solitary creature who attempts to put an end to Christmas by stealing Christmas-themed items from the homes of the nearby town Whoville on Christmas Eve. Despite his efforts, Whoville’s inhabitants still celebrate the holiday, so the Grinch returns everything that he stole and is the guest of honor at the Whos’ Christmas dinner.”

Since the 50s, the book has inspired many movie adaptations.

Dr. Seuss’ How the Grinch Stole Christmas! became an animated film in 1966. This movie starred Boris Karloff, who narrated snippets from the book. Songs such as the famous “You’re a Mean One, Mr. Grinch” and “Trim Up the Tree” were added to the children’s motion picture. Characters from the book transferred over to the screen too.

The 2000 adaptation of How the Grinch Stole Christmas starred Jim Carrey as the adored green grouch. Both the 1966 and 2000 movie adaptations featured popular songs, lovable characters, and a similar overall plot.

Books and movies are just some of the places the character can be spotted.

Of course, Universal Orlando Resort fans know that the Grinch can be spotted lurking around Seuss Landing in Universal’s Islands of Adventure during the Grinchmas season.

A recent TikTok video shows that the Mean One can also be found spreading holiday cheer in other theme parks, dropping it low nonetheless.  TikTok user @thegrinchperformer has racked up almost 11 million likes for his videos. Check it out below.

The TikTok features the influencer dressed up as the popular Holiday icon at the Fair. He shares his holiday spirit by strolling in front of a game booth and twerking for the camera. Fans praised the performer with comments like “he got moves” and “ayyyy slay.”

Do you think the Grinch should break it down at Universal’s Islands of Adventure this Christmas season? Let us know in the comments.

Comments Off on “He Got Moves,” The Grinch ‘Throws It Back’ at Theme Park