'Toy Story' Actor May Be Canceled, Accused of Gross Sexual Misconduct By Global Superstar - Inside the Magic 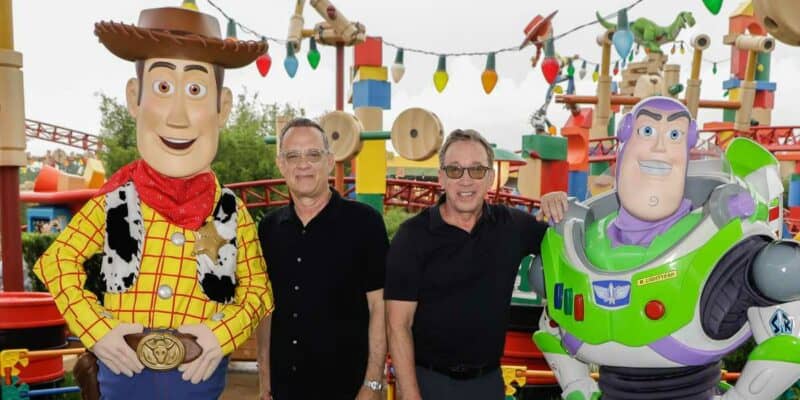 New claims allege that a leading star of the Toy Story movie franchise took part in an event of grossly inappropriate behavior at the beginning of his career.

Tom Hanks and Tim Allen are two of the most recognizable voices in the entertainment industry. Both harbor illustrious careers with many critical and commercially successful projects between them, but in 1995 the pair would become forever entrenched in pop culture after appearing as the humanoid action figures, Woody and Buzz Lightyear in Toy Story from director John Lasseter.

Hanks and Allen went on to reprise their roles in multiple other Toy Story projects spanning more than a decade. The household names are some of the most popular in the industry due to their involvement in the massive animated franchise from Disney and Pixar Animation Studios.

But, recent claims look to shake Allen’s career after the model and actress Pamela Anderson revealed explosive new details in her upcoming book.

According to an excerpt from Anderson’s memoir, “Love, Pamela”, the Buzz Lightyear actor revealed his penis to the actress on the set of the television sitcom Home Improvement when she was 23 years old. She writes (via Variety):

“On the first day of filming, I walked out of my dressing room, and Tim was in the hallway in his robe. He opened his robe and flashed me quickly — completely naked underneath. He said it was only fair, because he had seen me naked. Now we’re even. I laughed uncomfortably.”

Home Improvement was a huge success for The Walt Disney Company’s ABC network, becoming the number-one television show in the United States and lasting for eight seasons from 1991-1999. Tim Allen played the lead character of Tim Taylor, a role that established his acting career. In Home Improvement, Anderson played Tool Time Girl Lisa — a role which also set Anderson off in the TV business following her career as a glamor model, primarily for Playboy Magazine, and became the precursor for her immense success as C.J. Parker in the widely-syndicated Baywatch.

As Variety notes, Allen’s supposed comments about fairness likely come from him seeing her glamor model shots in Playboy Magazine. “Love, Pamela” also details the controversy around last year’s Hulu series, Pam & Tommy, which saw Lily James and Sebastian Stan take on the title roles of Pamela Anderson and Tommy Lee, respectively, during the infamous sex tape stealing incident of 1995. Anderson reportedly never answered or responded to any requests regarding the TV show.

Now, back to Tim Allen. According to the report, the Toy Story star has denied claims that the event happened, stating, “No, it never happened. I would never do such a thing,”

Allen is currently starring in the Disney+ television series, The Santa Clauses, which aired its first season this past December. A second season is in development. The Santa Clauses sees Allen reprise his role as Scott Calvin/Santa Claus — a role that he originated in 1994, and twice more in sequels in the Santa Clause franchise releasing 2002 and 2006. The Disney streaming show has not been without its criticisms, however, and this latest bout of controversy directed at its leading man may give Disney execs. more to consider when planning the future of the franchise.

What do you think of Pamela Anderson’s claims about Tim Allen? Let us know in the comments down below!