Despite Tim Allen's Approval, Disney Hit With Boycott For "Praising Satan" - Inside the Magic 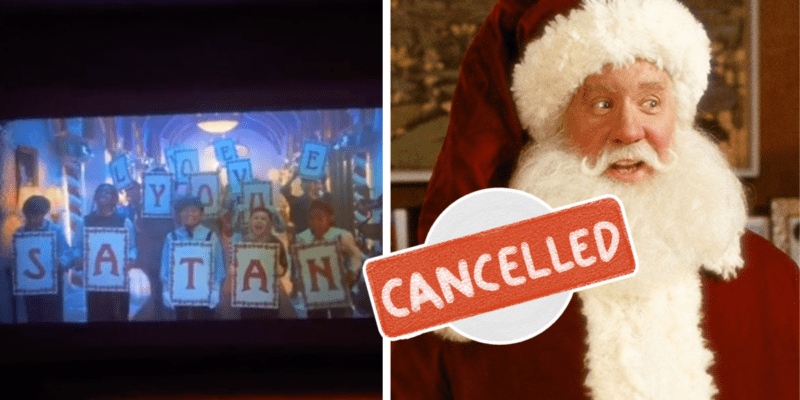 Christmas seemed so far away in January when  Tim Allen announced that he would return to his home at the North Pole as Santa Claus in The Santa Clauses, an original series now streaming on Disney+.

Now that the series is almost complete – the sixth and final episode comes out on December 14 – fans are looking back at this addition to the beloved 1990s franchise.

However, not everyone is happy. Earlier this month, we reported on the backlash to a joke in the third episode of the series, “Into the Wobbly Wood,” released on November 23. Attempting to show their support for Scott Calvin (Tim Allen), elves hold letter signs meant to spell “We Love You Santa.” Instead, the characters spell, “We love you Satan.” The elves shriek in terror when they realize the mistake.

Related: Inside Christmas time at Epcot with ‘Candlelight’ choir, Mrs Claus, and a few beautiful views at Walt Disney World

Though Tim Allen vehemently defended the show, promising that Christ is at the heart of this merry Christmas series, some social media users still plan to boycott Disney Plus. TikTok user @yojets recently shared a video of the scene with commentary:

“I’m boycotting Disney+. I’m deleting my account. I can’t rock with them. I can’t do this,” the user said.

“Once you know what we know you begin to realise it’s everywhere literally everywhere. His fingers are in everything. F U S A T A N. Thanks for sharing,” @mandyholt80 commented.

With a simple gag, The Santa Clauses alienated a fringe portion of the audience known-conservative Allen hoped it would target.

“It originally had a lot of otherworldly characters, and ghosts, and goblins,” Allen told TheWrap in November. “I said no, this is Christ-mas. Its Christ-mas. It literally is a religious holiday. We don’t have to blow trumpets, but I do want you to acknowledge it. That’s what this is about. If you want to get into Santa Claus, you’re gonna have to go back to history, and it’s all about religion.”

What do you think of the “We Love You Satan” joke in The Santa Clauses?