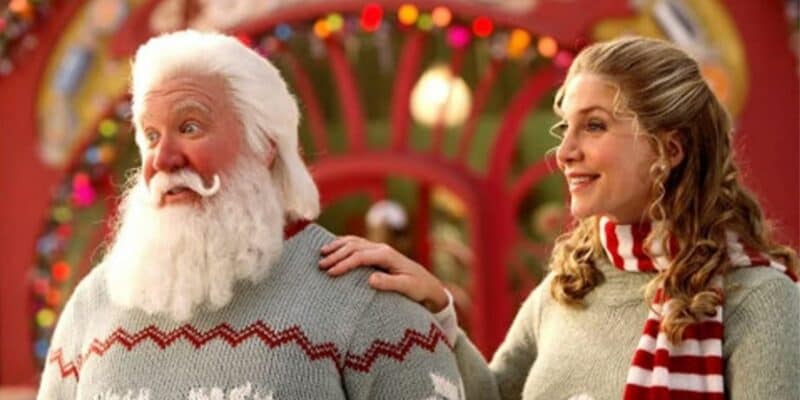 Ever since Disney+ entered our lives back in 2019, the House of Mouse has wasted no time in converting popular movies into TV shows, whether it’s the likes of MCU shows such as Hawkeye (2021) and WandaVision (2021), or the more animated kind like Monsters at Work (2021).

In the first movie, Scott Calvin (Tim Allen) is a single father who becomes Santa Claus, after accidentally killing the previous one (although we’re not entirely sure what happened to the original Mrs Claus)! But in the second movie, he meets Carol Newman (Elizabeth Mitchell), a principal at his son’s school, who ends up transforming into the new Mrs. Claus!

Along with Tim Allen, Elizabeth Mitchell returns for the third movie in the trilogy, in which Scott Calvin battles Jack Frost (Martin Short), who decides to mess around with time and jeopardize Christmas. But while the third movie was the last, as we now know, a brand-new Disney+ TV series will pick up where the movies left off, as Tim Allen will be reprising his role as Scott Calvin.

The series will reportedly focus on Scott Calvin as he’s on the brink of his 65th birthday, when he realizes that he can’t be Santa Claus forever. While still managing to juggle his duties as Santa and as a family man (on both sides of the North Pole), Scott sets out to find his replacement so that he and his family can relocate to the South Pole.

And now, Deadline has reported that Elizabeth Mitchell will also be reprising her role in the upcoming limited series as Carol Claus, alongside the Disney veteran actor Tim Allen. Comedy actor Tim Allen is best known for voicing Buzz Lightyear in the four Toy Story movies and all the shorts — although he won’t be voicing the character in the upcoming Lightyear (2022).

Mitchell, however, has also appeared in other Christmas movies, such as Hallmark’s The Christmas Club (2019), although it’s fair to say that she’s best known for The Santa Clause movies, which, perhaps thanks to Disney+, have become more popular in recent years.

Outside of the holiday season, though, she has also appeared in the cult classic TV series Lost (2004 — 2010). But now, she’s set to fill the red boots of the iconic Mrs Claus once again, who is a treat to watch alongside Tim Allen in the last two movies in The Santa Clause trilogy.

The Santa Clause TV series will stream on Disney+ some time this year.

Are you excited for The Santa Clause TV series, and seeing Tim Allen and Elizabeth Mitchell reprise their roles as Mr and Mrs Claus?