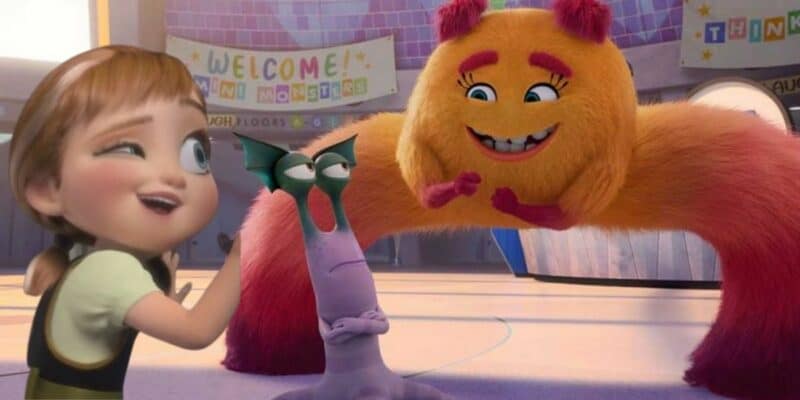 Disney+ is constantly pumping out new content for viewers, from Disney Animation to Marvel and more!

As of late, we have seen more Pixar content added to the streaming service with Monsters at Work, a spinoff series from the classic Monsters Inc. movie. The series is already becoming loved by many with its weekly release schedule keeping audience members engaged and constantly returning for more.

This week, Disney fans may notice something extra special in the episode, as a familiar young princess voice, or should we say, Queen’s voice, is used to bring a brand-new character to life.

One Disney film that instantly had fans heading back to the movie theater to rewatch the film was Frozen. When Frozen debuted in 2013, it shattered box office records and had Disney fans wanting to meet Anna and Elsa, as well as the adorable snowman Olaf, and the ultimate duo, Kristoff and Sven. Frozen 2 topped its predecessor years later as well.

Kristen Bell may be Anna’s most popularly recognized voice, but if we recall Frozen 2, there is a young Anna’s voice that viewers grow accustomed to as well. Now, it seems like young Anna is a long way away from Arendelle as she joins the world of Monstropolis.

In this week’s new episode of Monsters At Work, streaming Wednesday on Disney+, executive producer Bobs Gannaway’s daughter, Hadley Gannaway, guest stars as Ms. Flint’s daughter, Thalia—and we’ve got an exclusive look in the clip below! Hadley even shares a scene with her dad, who voices Otis, the Monsters, Inc. receptionist, in the series. The series’ voice cast includes Disney Legends Billy Crystal and John Goodman reprising their respective roles as Mike and Sulley.

Hadley Gannaway voiced young Anna in Frozen 2, and it seems Disney is not done with her sweet voice just yet. If you have not yet seen the show, below is a short description of what to expect when you watch.

“Monsters At Work” takes place the day after the Monsters, Incorporated power plant started harvesting the laughter of children to fuel the city of Monstropolis, thanks to Mike and Sulley’s discovery that laughter generates ten times more energy than screams. It follows the story of Tylor Tuskmon, an eager young monster who graduated top of his class at Monsters University and always dreamed of becoming a Scarer until he lands a job at Monsters, Incorporated, and discovers that scaring is out and laughter is in. After Tylor is temporarily reassigned to the Monsters, Inc. Facilities Team (MIFT), he must work alongside a misfit bunch of mechanics while setting his sights on becoming a Jokester.”

Have you seen Monsters at Work yet? Let us know your thoughts on the new Disney+ show in the comments below.