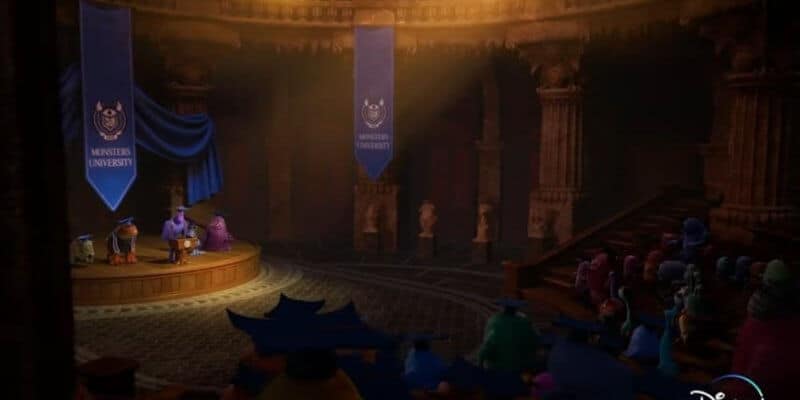 The long-awaited streaming series, Monsters At Work, is a spinoff of the classic 2001 Pixar Animation Studios film, Monsters, Inc. — and, it picks up right after the movie ends! Some of our favorite fuzzy characters like Mike Wazowski (Billy Crystal) and Sulley (John Goodman) are back, along with brand-new monsters who work for Monsters, Inc.

As we mentioned ,the Disney+  show includes returning stars Billy Crystal and John Goodman, as well as a new character named Tylor Tuskmon played by Ben Feldman. This enthusiastic monster works his entire life to become a “scarer” and wants nothing more than to work for Monsters, Incorporated.

Tylor’s entire learning experience at Monsters University — becoming amazing at scaring children — is thrown away as he learns that Monsters, Inc. has shifted gears. No longer are monsters required to scare kids, but to make jokes and get them to laugh!

Season 1 of Monsters at Work premiered on Disney+ on July 7, 2021. But, before you start Episode 2, check out this hilarious deleted scene [below] that Disney+ shared on their YouTube channel recently.

Here we get to see Tylor’s graduation at Monsters University and hear his inspiring valedictorian speech to all his classmates!

Check out the Disney+ press release description of Monsters At Work:

Monsters at Work” takes place the day after the Monsters, Incorporated power plant started harvesting the laughter of children to fuel the city of Monstropolis, thanks to Mike and Sulley’s discovery that laughter generates ten times more energy than screams.

It follows the story of Tylor Tuskmon, an eager young monster who graduated top of his class at MonstersUniversity and always dreamed of becoming a Scarer until he lands a job at Monsters, Incorporated, and discovers that scaring is out and laughter is in. After Tylor is temporarily reassigned to the Monsters, Inc. Facilities Team (MIFT), he must work alongside a misfit bunch of mechanics while setting his sights on becoming a Jokester.

Have you seen Monsters At Work on Disney+ yet? Let us know your review in the comments below!

Comments Off on Watch a Hilarious Deleted Scene from ‘Monsters at Work’!