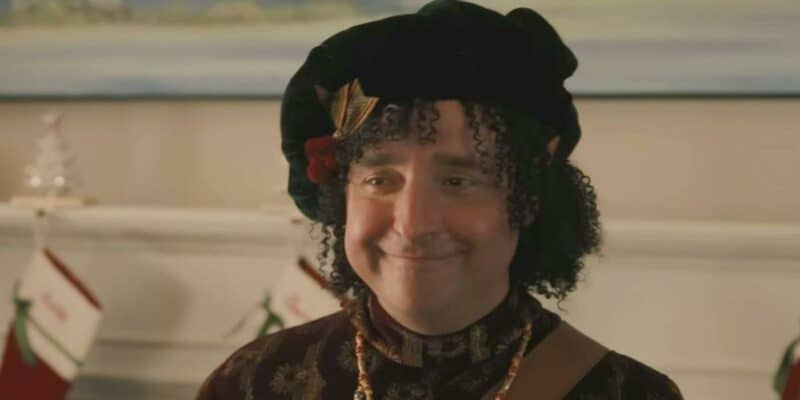 David Krumholtz, who plays Bernard in “The Santa Clause” movies and show, is finally back!

It’s been over 20 years since the original “Santa Clause” came out, and we got to meet our favorite wise-cracking elf who wasn’t afraid to speak his mind.

In an interview with Entertainment Weekly, Krumholtz says that people still recognize him as Bernard the elf; and we finally get to see him in action once again in this week’s episode of “The Santa Clauses” on Disney Plus!

Related: E.L.F.S- What Ever Happened to Santa’s Elite Group of Elves

In regard to the first movie, David says- “At the time I was 16, and I had just started acting. I didn’t know what about me was interesting, but I did have this kind of wise-cracking Queens attitude, and for lines like ‘Haven’t you people ever heard of basting?‘, I guess that really worked.”

In this new series, Christmas is utterly falling apart, and no one is doing anything about it. Scott Calvin (Tim Allen) has retired, and the elves are too timid and sweet to actually step up.

So, Bernard leaves his new life to come and help save Christmas.

Krumholtz teases that his episode will introduce important lore for “The Santa Clauses” franchise.

“In my episode, we learn a lot about who Santa Claus really is, who he has been, who the elves are, and why they exist,” Krumholtz says. “It’s all brought into some perspective instead of just accepting the fact that there are pointy-eared elves working somewhere on the top of the Earth for a jolly, bearded, fat man.”

Related: “Ho, Ho” Oh No! We Might Know What Happened to Bernard

“It’s a mix of the actual history of the myth of Santa Claus that has been written about for hundreds of years, and some new stuff thrown in to make sense of it all. It’s really, really brilliant.”

Krumholtz continues, “when I read it, I was so moved by it. It’s this real, genuine attempt to sort create a lineage for Santa Claus and for the elves. So you get an idea of what exactly happened that night in the first movie when the Santa Claus fell off Scott Calvin’s roof, why Scott Calvin became Santa Claus, why it was him and not someone else.”

“Did Santa really die when he fell off that roof? What really went on that night? What actually happens to Santas and to elves? Without giving too much away, it’s kind of like a multiversal origin story of Christmas.”

Are you ready to see everyone’s favorite elf?!