With Splash Mountain Gone, Fans Are Ready to Retheme Another Racist Ride - Inside the Magic 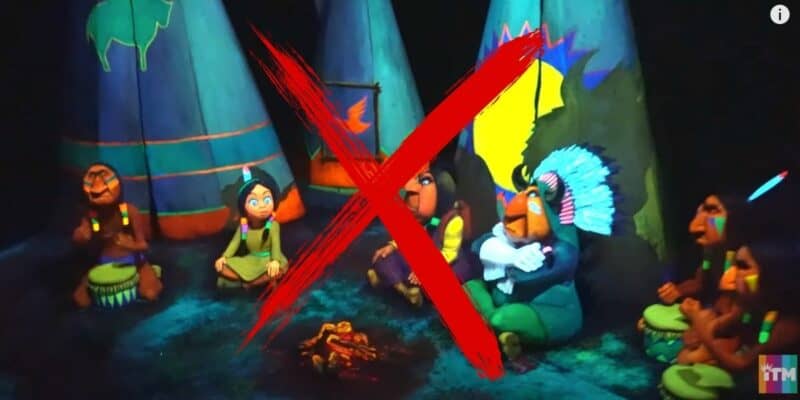 Splash Mountain shuttered its doors at Walt Disney World Resort on Sunday to make way for Princess and the Frog (2009) themed Tiana’s Bayou Adventure. The Magic Kingdom attraction closed amidst a searing culture war between those who recognize the racist history of the film behind the water ride, Song of the South (1946), and nostalgic fans who consider the controversy overblown. Disneyland Resort’s version of the attraction will close soon, though a date hasn’t been officially announced.

Some who supported the retheme are now revisiting another classic Fantasyland ride at Disneyland Park and Magic Kingdom: Peter Pan’s Flight. This Walt Disney-original attraction features a stereotypical depiction of Native Americans, much like the film Peter Pan (1953), which now airs with a cultural sensitivity warning on Disney+.

Should Disney remove the Peter Pan ride? After Splash Mountains removal and talks of updating all Disney, I believe that Peter Pan is another series that is incredibly outdated. I always felt disgusted and uncomfortable on that ride as I’m sure many others have. Anyone else think they should remove that ride and replace it with something more forgiving?

The Disney Parks fan further suggested an Up (2009) retheme so that Guests could fly in Carl’s balloon-piloted house instead of a pirate ship over Neverland.

“Not sure if they’ll totally retheme it within the next probably decade or two but not outside the realm of possibilities of swapping out the racist scenes for something else within Peter Pan (maybe something with Tink?)! I’d love to see something new in Fantasyland though,” commented u/Skyebyrd1.

While many defended Peter Pan’s Flight, others pointed out it would be incredibly easy to remove the racist depiction of Native Americans from the ride. “I don’t even get why this would be a big thing,” u/DrewCrew62 argued.

This isn’t the first time fans have called for an update or total overhaul of Peter Pan’s Flight, but it’s especially relevant as construction begins on the former Splash Mountain in Central Florida. u/Sparkle-Bubble compared the two:

Peter Pan is fine if they just remove the scene with the racist stereotypes of Native Americans. It’s an offensive spot in an IP that’s largely benign. Splash had to go because there’s no way around the entire IP being racist as h*ll…which they knew in the 90s when it opened.

This classic Disney Park dark ride can be found in Fantasyland on both coasts! From Disney:

Embark on a high-flying adventure over iconic scenes made famous in Disney’s animated film.