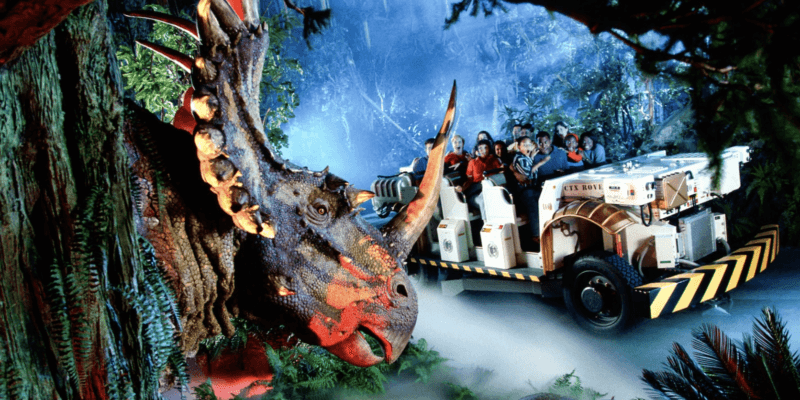 There have been a lot of talk lately on a possible retheme coming to the DINOSAUR attraction, located at Walt Disney World — especially when Disney seemingly pulled the merchandise from the stores and as the dinosaur statue out front looks a bit dismal.

So how do fans truly feel about DINOSAUR? Do they think the attraction should become rethemed into some more modern? Or are they asking Disney to leave it alone? Here is what our Inside the Magic audience has to say.

The DINOSAUR ride — which was originally called Countdown to Extinction — can be found in the DinoLand, U.S.A. area at Animal Kingdom. It opened in 1998 and ever since, it has drawn the attention of Guests as they are eager to travel back in time and “get that dino.”

Although many fans still have a love and appreciation for DINOSAUR, some Guests feel the ride is a bit dated. This has sparked multiple conversations amongst fans, speculating a possible retheme may be coming. Even though Disney has not confirmed if a new IP will replace Dinosaur, many fans did not hold back their opinions on a recent article of ours discussing if they think DINOSAUR should, in fact, be rethemed or if it should be left alone.

And it seems as though fans are pretty split when it comes to this topic. Jim, for example, thinks the entire DinoLand, U.S.A. area should be redone as they expressed:

I’d love to see the Dinoland area retheamed with a South America theme (would make more sense with the rest of the park) and CTE updated to match its sister attraction “ Indiana Jones“ (same ride vehicles) from Disneyland.

This is something Inside the Magic Facebook follower Andy S. echoed:

They should just ditch the whole dinosaur theme, retheme this area to South America, and retheme DINOSAUR to Indiana Jones and the Temple of the Forbidden Eye. Both have the exact same ride system and just about the exact same track layout, so Disney would just have to reskin it. They could also put an Encanto dark ride in this area (I say Encanto and not something original because Cheapek doesn’t have an original idea in his head).

While Inside the Magic Facebook follower Colin M. suggested a Zootopia theming:

I think it needs to be rethemed to Zootopia! They could easily retheme the cars to Z.P.D. vehicles. I know china is building a Zootopia ride there and maybe Disney is just waiting to get the rights to bring that to Disney World. I know they have to wait like 5 years before they could use it in another park. What’s a better park than Animal Kingdom though to have a Zootopia ride??

And Sarah B. hopes it gets rethemed as the current condition of the attraction gave her a migraine:

We rode this in July, ruined the rest of our day. It gave me a horrible migraine and hurt my husband’s back. 🙁 I love the rest of Animal Kingdom, so I really am hoping for a re-theme of the DinoLand area. I can think of a few ways they could take it- Moana, Nemo, or my personal favorite- give the area to Pocahontas!

On the other hand, many feel Disney should leave DINOSAUR alone as it is one of their favorite rides. For example, Jennifer G. said:

I really do love this ride. It is too frequently overlooked.

Noooooo!!! I love that ride

Melanie R. did not hold back her opinion as she commented on our recent article saying:

Do. Not. Mess. With. Dinosaur.

And lastly, Eve C. hopes Disney does not retheme DINOSAUR as it is her favorite ride at Disney’s Animal Kingdom. She said:

I hope not this is my favorite animal kingdom ride

At this time, Disney has not confirmed if a new IP will replace Dinosaur.

Do you think Disney should retheme DINOSAUR? Let us know in the comments below.