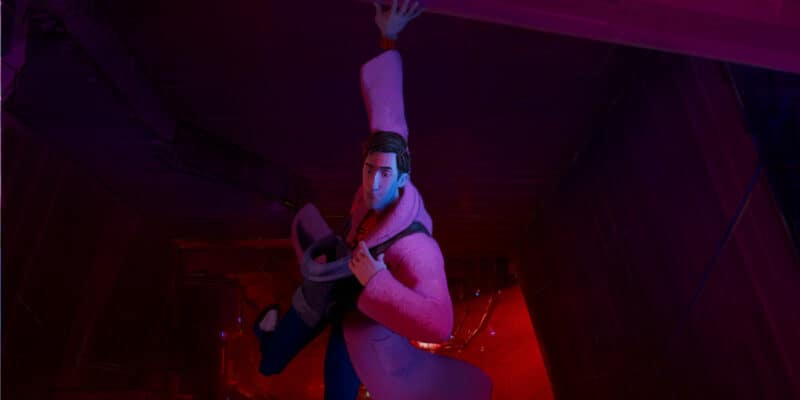 Fans couldn’t be happier for Peter B. Parker’s good news in Spider-Man: Across the Spider-Verse (2023)!

In stark contrast to Peter Parker (Chris Pine), Peter B. Parker (Jake Johnson) had seen better days. In Spider-Man: Into the Spider-Verse (2018), fans saw a Spider-Man (Johnson) who had been put through the wringer: on top of battling his way through all the classic Spidey villains, his marriage had fallen apart, he’d fallen on hard times financially, and had just been tossed into a parallel universe.

Into the Spider-Verse was an excellent ensemble piece. Though the protagonist was Miles Morales (Shameik Moore), there was significant character development for his two main mentors, Gwen Stacy (Hailee Steinfeld) and Peter B. Parker (Johnson). Over the course of the film, Gwen (Steinfeld) learns to open up again and to be able to count on a team, her friends, and Peter (Johnson)? He learned a bit more about himself.

In a scene that is somehow both touching and funny, Peter (Johnson) runs into a Multiversal variant of Mary Jane (Zoë Kravitz). The older Spider-Man (Johnson) has a mini-breakdown, realizing that he is willing to make things work with his universe’s version of MJ (Kravitz). Fortunately, because of Miles’ (Moore) help, he’s able to return to his own universe to do just that.

In the recently released trailer, fans saw Peter B. Parker (Johnson) entering the Multiverse with a baby carrier strapped to his chest, but no baby (makes sense; why would you bring a baby into a situation like that?). Now, the official Spider-Verse Twitter account has shared that fans may (pun intended) actually get to see the infant Mayday Parker!

From Peter B. Parker to Papa B. Parker #SpiderVerse

From Peter B. Parker to Papa B. Parker #SpiderVerse pic.twitter.com/4OMb4jBGdi

The adorable concept art showcases a fiery red-haired child with two different colored eyes, wearing her own Spidey attire, and enjoying some much-needed time with Dad (Johnson). How large a part Mayday will play in the upcoming film is yet to be determined, but it’s exciting to see that audiences will get to see Peter (Johnson) have at least somewhat of a happy ending! That does bring up some questions, however…

Up to this point, all the promotional material audiences have seen for Across the Spider-Verse has been pointing to the stakes being raised from the first film. Miles (Moore) and Gwen (Steinfeld) are becoming closer, Peter (Johnson) now has a baby, Issa Rae plays a pregnant Jessica Drew/Spider-Woman, and the Multiverse is once again in peril. Could the deepening of relationships and families point to even greater tragedy on the horizon?

Spider-Man: Across the Spider-Verse comes to theaters June 2, 2023, and stars Shameik Moore as Miles Morales, Hailee Steinfeld as Gwen Stacy, Jake Johnson as Peter B. Parker, Issa Rae as Jessica Drew/Spider-Woman, Oscar Isaac as Miguel O’Hara/Spider-Man 2099, and Jason Schwartzman as The Spot. The sequel promises to see Miles (Moore) pushed to his breaking point as he fights against new threats and a whole host of Spider-People to save the Multiverse.

What did you think of this concept art? Let us know in the comments below!