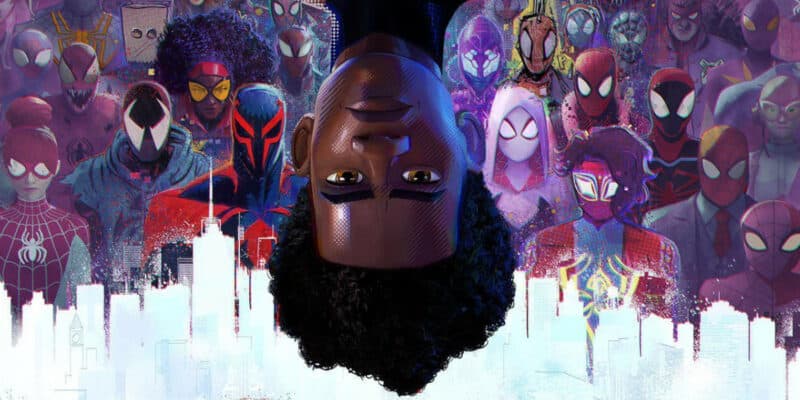 Fans have been anxiously searching promotional material for identities of the Spider-People, and now there are seven confirmed!

Since the release of the trailer and posters for Spider-Man: Across the Spider-Verse (2023), fans have been buzzing, trying to identify the dozens of Spider-People that they’ve seen. There’s certainly no shortage of figures to guess; in the International poster alone, fans can see over four dozen different faces, and that doesn’t even show all of the Spider-Folk from the trailer! Fortunately, Sony has just ID’d 7 of these new characters!

This early on, Sony Animation Studios doesn’t want to give away too much. Still, fans know for sure that Miles Morales (Shameik Moore) will be following his friend, Gwen Stacy (Hailee Steinfeld), into the Multiverse where dozens upon dozens of Spider-People seem to be congregated, almost like an interdimensional bus stop. What brings them there? More likely than not, the threat posed by Jason Schwartzman’s Spot.

The sequel will mark the second team-up for Miles (Moore) and Gwen (Steinfeld). Together with Peter B. Parker (Jake Johnson) and a few other Spider-People, the team took out a Multiverse collider built for Kingpin (Liev Schreiber) in Spider-Man: Into the Spider-Verse (2018). Now, they’re back and seemingly facing down a whole host of other Spider-People to once again save the Multiverse!

Fans have already been made aware of a few of those variants, including Issa Rae’s Jessica Drew/Spider-Woman, and Oscar Isaac’s Miguel O’Hara/Spider-Man 2099, but now, Sony Animation Studios has released, and the Direct has reported the logos for nine heroes in the upcoming film in a series of Tweets.

The first two audiences will recognize as Miles (Moore) and Gwen (Steinfeld), and the next as Spider-Woman (Rae) and Spider-Man 2099 (Isaac), but the rest may pack a few surprises! Confirmed in these new images are Pavitr Prabhakar/Spider-Man India, Spider-Punk/Hobart Brown (Daniel Kaluuya), Ben Reilly/Scarlet Spider, Cyborg Spider-Woman, and Spider-Byte.

Choose your fighter. Meet the Spider-People behind these icons and more when it’s time to go across the #SpiderVerse on June 2. 🧵

The Tweets mentioned that there would be more in addition to the Spider-People presented here, but this lineup is already pretty exciting! Add on top of this news the producers, directors, developers, and even animators all barely being able to contain their excitement, and it’s a recipe for an outstanding film!

Spider-Man: Across the Spider-Verse hits theaters June 2, 2023, and stars Shameik Moore as Miles Morales, Hailee Steinfeld as Gwen Stacy/Spider-Gwen, Oscar Isaac as Spider-Man 2099, Issa Rae as Jessica Drew/Spider-Woman, Jake Johnson as Peter B. Parker/Spider-Man and Jason Schwartzman as The Spot. The Sequel pits Miles (Moore)  against other Spider-People, trying to save the entire Multiverse!

What do you think of these new Spider-People? Let us know in the comments below!