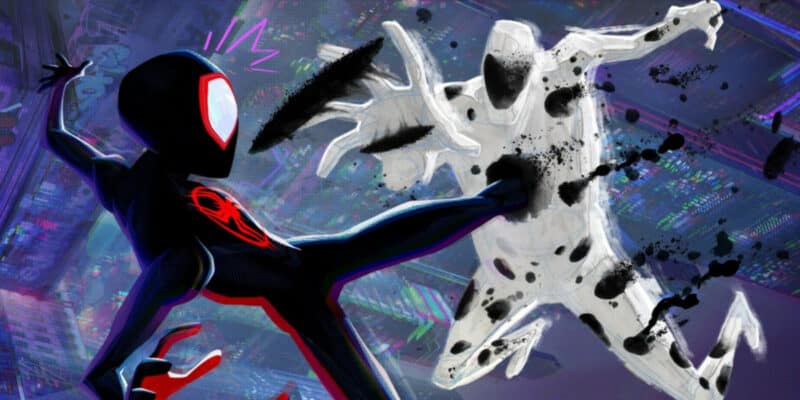 Spider-Man: Across the Spider-Verse (2023) looks even more ambitious than its predecessor!

Many reports have been released recently about the upcoming Sony Pictures Animation film Across the Spider-Verse, promising some fantastic updates and a Multiverse full of variations on Spider-Man. The sequel to the uniquely animated Spider-Man: Into the Spider-Verse (2018) hits theaters in a little over six months, and people are already buzzing.

Into the Spider-Verse introduced audiences to Miles Morales (Shameik Moore), an Afro-Latino teenager living in a Multiversal variation of New York. Just like his Universe’s Peter Parker (Chris Pine), Morales (Moore) is bitten by a radioactive spider, and with mentorship from Peter B. Parker (Jake Johnson) and Spider-Gwen (Hailee Steinfeld), becomes the new Spider-Man.

The finale of the movie set up the sequel perfectly, showing Miles (Moore) adjusting to his new life, relaxing in his room when another portal to the Multiverse opens up, and the voice of Gwen (Steinfeld) drifts across space and time, asking Miles, “Got a minute?” The teaser trailer for Across the Spider-Verse picks right up on this, kicking off the new adventure.

The sequel promises even more Multiverse action, with images from the trailer already showcasing dozens of Spider-Folk, along with Oscar Isaac’s Spider-Man 2099, Issa Rae’s Jessica Drew/Spider-Woman, and a few images of the main antagonist, The Spot, played by Jason Schwartzman. Now, after a recent interview with The Wrap, Spider-Verse producers are promising even more!

Chris Miller and Phil Lord, longtime Sony Pictures Animation filmmakers, discussed their tenure at the relatively young studio, going back to Cloudy With a Chance of Meatballs (2009). The duo also talked about the Spider-Verse franchise and what an amazing experience the first film was and teased the excitement in the sequel. Of the new film, Miller said:

“The things that we’re doing in this new Spider-Verse movie are breaking the pipelines all over again. But everyone’s excited about it and not just terrified…”

Lord added an exciting note, hinting that the film may be pushing the boundaries at the studio:

“It’s definitely more insane…We finally made some people nervous. I feel like we’ve done our job.”

Regardless of what it is that’s making people at Sony “feel nervous,” it sounds like producers Phil Lord and Chris Miller are really pushing the boundaries, and endeavoring to give audiences an outstanding product. Who knows what new twists this sequel will bring or what audiences can expect from the rumored third installment?

Spider-Man: Across the Spider-Verse premieres in theaters June 2, 2023, and stars Shameik Moore as Miles Morales, Hailee Steinfeld as Spider-Gwen, Oscar Isaac as Spider-Man 2099, Issa Rae as Spider-Woman, Jake Johnson as Peter B. Parker/Spider-Man and Jason Schwartzman as The Spot. Across the Spider-Verse will see Miles (Moore) fighting to save the Multiverse once again, but this time, the clash will be against other Spider-People, in addition to the mysterious Spot (Schwartzman).

What do you hope to see in Across the Spider-Verse? Let us know in the comments below!