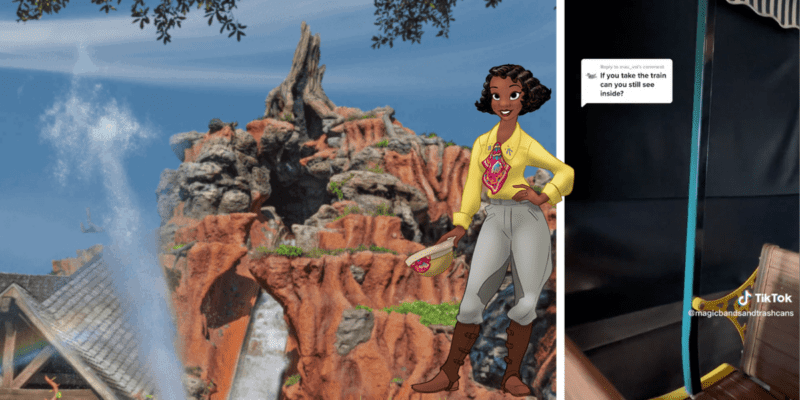 In a contentious move among fans, Walt Disney World Resort officially closed its version of Splash Mountain this week to make room for Princess and the Frog (2009) themed Tiana’s Bayou Adventure. The Princess Tiana water ride will open in 2024 and share the same track as Splash Mountain at Disneyland Park and Magic Kingdom, though the Disneyland Resort log flume ride has yet to close.

Two days ago, we reported that construction walls were built bearing the logo for a Salt Dome Company – referring to the ride’s explanation as to why there’s a “mountain” in the New Orleans Bayou – and Imagineers were spotted walking the now-dry tracks of the attraction. We now have another update about the state of the former Song of the South (1946) themed ride.

According to a video from TikToker @magicbandsandtrashcans, what was once a window into Splash Mountain from the newly-reopened Walt Disney World Railroad is now covered with a dark tarp:

Replying to @mav_val tarps are covering the windows as they get to work in what was previously known as Splash Mountain! #splashmountain #disneyattractions #magickingdom #disneyworld

Though the tarps are very dark, a bit of light comes through from the inside portion of the former Splash Mountain, further confirming that work has already begun on Tiana’s Bayou Adventure!

The ride will take place after the events of Princess and the Frog and feature human versions of Princess Tiana and Prince Naveen. Voice actors Anika Noni Rose (Tiana), Bruno Campos (Naveen), Jenifer Lewis (Mama Odie), and Michael Leon Wooley (Louis the Alligator) will reprise their roles for the attraction! Keith David is not expected to reprise his role as villainous Dr. Facilier.

Fans hoping for a “last Splash” can still visit Br’er Rabbit and friends at Disneyland Resort until the Disney Park announces Splash Mountain’s closure date. The ride will remain the same at Tokyo Disneyland.