Construction Walls Up, Work Beginning on Tiana's Bayou Adventure - Inside the Magic 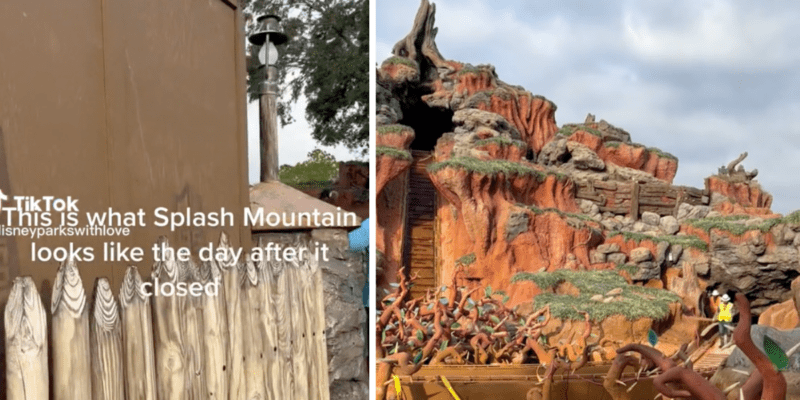 We’re just over a year away from heading to New Orleans with Princess Tiana and friends on Tiana’s Bayou Adventure at Disneyland Resort and Walt Disney World Resort! The ride’s controversial predecessor Splash Mountain closed permanently at Magic Kingdom on Sunday, while a closing date hasn’t been announced for the Disneyland Park version of the log flume attraction.

The retheme of the Song of the South (1946) themed water ride was controversial, with petitions and a #SaveSplashMountain campaign gaining traction in the months leading up to Splash Mountain’s permanent closure. In the end, the racist history of the ride could not be ignored. Princess and the Frog (2009) is officially on its way!

One day after Splash Mountain closed at Walt Disney World Resort, TikToker @disneyparkswithlove shared a video of construction walls around the attraction. Imagineers and construction workers were also spotted walking the tracks:

The brown construction walls fit well into the surrounding Frontierland and feature an homage to the newly-released storyline of Tiana’s Bayou Adventure. A “SALT DOME COMPANY” logo is imprinted onto the temporary walls. The ride will take place on a tall salt mine, explaining how a mountain fits into the flat Bayou!

Nostalgic fans shouldn’t expect Splash Mountain easter eggs on Tiana’s Bayou Adventure. Though concept art for the Princess and the Frog ride showed Br’er Rabbit still adorning the ride vehicles, an Imagineer quickly confirmed that they would be removed before the ride opened. On Sunday, an insider revealed that few, if any, animatronics are to be salvaged for the new attraction.

Tiana’s Bayou Adventure will take place after the events in the Walt Disney Animation Studios film. Anika Noni Rose (Tiana), Bruno Campos (Naveen), Jenifer Lewis (Mama Odie), and Michael Leon Wooley (Louis the Alligator) will return to the Bayou to voice the ride’s characters. Keith David is not expected to reprise his role as Dr. Facilier.

Tiana’s Bayou Adventure will open at Disneyland Resort and Walt Disney World Resort in 2024. Inside the Magic will continue to report progress on this exciting Splash Mountain retheme!

Are you looking forward to Tiana’s Bayou Adventure?