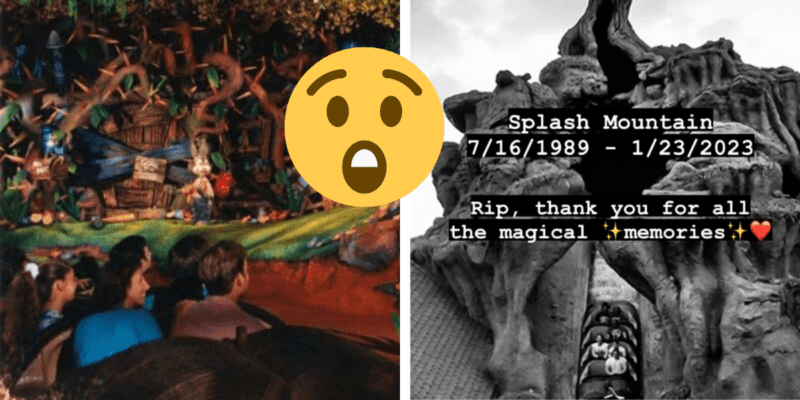 Splash Mountain closed at Walt Disney World Resort on January 23 after years of debate on the racism hidden in its film inspiration, Song of the South (1946). The water ride will reopen as Tiana’s Bayou Adventure at Magic Kingdom and Disneyland Park in 2024, though the latter hasn’t officially closed. (Tokyo Disneyland will keep its version of Splash Mountain).

As some mourn the decades-old attraction, others call out over-the-top tributes to the disgraced log flume ride. Some of the loudest voices on social media this week have been Disney Influencers, an already-controversial group known for disruptive live streams and inappropriate behavior.

One Disney Park fan, Luis (@luis.wtf on TikTok), shared what became a popular video about the way Disney Influencers were saying goodbye to Splash Mountain on Sunday:

“So Disney’s most racist ride is closing in Walt Disney World today, and this is what Disney influencers’ Instagram stories basically look like,” Luis said. Alongside the infamous “Angel” by Sarah McLachlan, he shared a recreation of many Instagram stories he’d seen.

“Get a grip besties,” he wrote. Commenters overwhelmingly agreed.

“I’ve spent my day laughing and calling out the bigotry,” wrote @b_Minnie_24. “I was called too woke lol! Bring on Princess Tiana!!!”

“It’s so funny to watch tho ppl make literal obituary videos for it here,” @powerfullyisa said.

“The amount of grown adults I’ve seen in comment sections mad bc disney is being ‘woke’ by retheming the ride,” echoed @makeupbyjennesy.

Disney Influencers aren’t the only ones being chastised for their behavior in the wake of Splash Mountain’s closure. One mom became the subject of social media harassment after revealing she named her daughter after the ride. An artist went viral after making a digital painting equating the closure of the controversial ride to the Black Lives Matter movement.

Are you excited to visit New Orleans on Tiana’s Bayou Adventure?