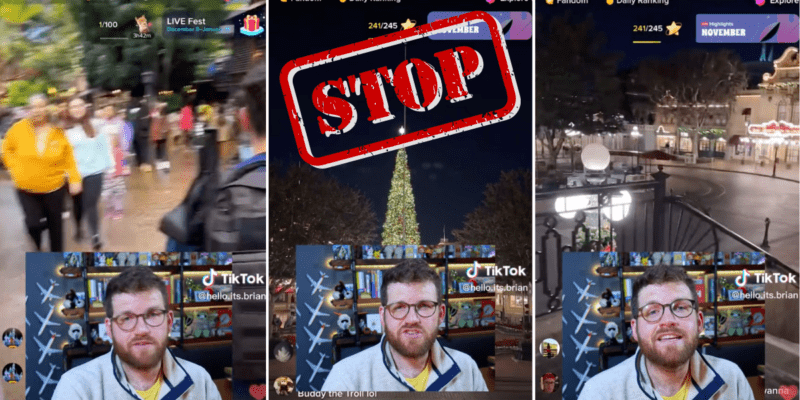 It might seem fun to visit and review Theme Parks for work, but “Disney Adults” and Disney Influencers have been the target of intense backlash on social media over the past year. Sometimes, it’s been for something as innocuous as crying while hugging Pluto at EPCOT. Some Guests feel that just being filmed for others’ social media content is “unbelievably rude” and “annoying.”

Related: Everything we learned from the Disney Plus showcase at D23 Expo

This week, content creator and self-professed “Disney Adult” @hello.its.brian spoke out against influencers and exposed one in particular for refusing to leave Disney Park property:

“Disney Adults aren’t all that bad. I know that because I have been to the center of the Disney universe, and I have seen something much, much worse…Disney influencers,” Brian began.

He showed his TikTok For You Page, which regularly featured Disneyland live streamers. A few weeks ago, he noticed one live streamer, Jose of @eat.sleep.positivity, ending their day on Main Street, U.S.A., around midnight. Disneyland Park was closed for the night, and the remaining Guests were finishing their shopping before leaving. But Jose was sitting on a bench and talking to his live chat.

“Yeah, I guess. But also, you can go. You just told us five minutes ago that you’re going to be here tomorrow night. And you were probably here the night before. So just go home,” he said.

The next night, Brian logged into a different TikTok account to see if Jose was streaming. He was.

“It’s about 12:55 tonight, and now he’s sitting on a bench near the train station, which is kind of near the exit of the Park. So like, he’s almost there. Good job,” Brian joked. “Again, he’s just kind of sitting there talking to his chat while filming the big tree in the middle of the Town Square.”

“Finally, it strikes 1:00, so I’m thinking, okay, he’s going to leave now. He doesn’t. And he should know at this point; he’s got to go,” he continued. “He definitely knows. But he just keeps waiting. It isn’t until 1:06 when a staff member comes up and sort of asks him to leave. And when he does, it just annoyed me so much. He looks up at him, and he goes, ‘Is it that time?’ Dude. You know it’s that time. Come on.”

Brian said the situation would have just been annoying, but it got worse. Jose still refused to leave Disneyland Park.

“He walked over to the side and just stood there for another ten minutes. Ten minutes he sat there! Talking about nothing. Not shopping, not doing anything,” Brian explained. “He would occasionally look in the stores and be like, ‘I think that’s somebody I know!’ It wasn’t. He didn’t officially leave the Park until 1:17 a.m.”

“I know it’s a very innocuous thing. Viewed from a distance, it’s not the biggest thing in the world,” Brian said. “But it’s just that ground layer of entitlement. You’ll see that everywhere across the board with all of these influencers, and that’s not okay with me.”

He concluded the video with a clip from the live stream in which Jose professes to love and respect all Disney Cast Members. “Do you?” Brian asked. “Because it’s kind of looking like you don’t.”

Disney Parks fans thanked Brian for making the video, with many Disney Cast Members noting that people who stay in the Park late end up forcibly extending their shifts.

Jose publicly discussed the topic in the comments section, ultimately politely agreeing to disagree with Brian’s take on the matter. He said security Cast Members know him well, and he would never stay past his welcome, even when the Disney Parks are closed.

“There is nothing wrong with you wanting to defend these late night CMs u do bring up some good points,” he said. “I will keep the things you mentioned in mind. I’m always up for learning and growing in this industry.”

What do you think of live streamers staying past closing time at Disneyland Park and Disney California Adventure?